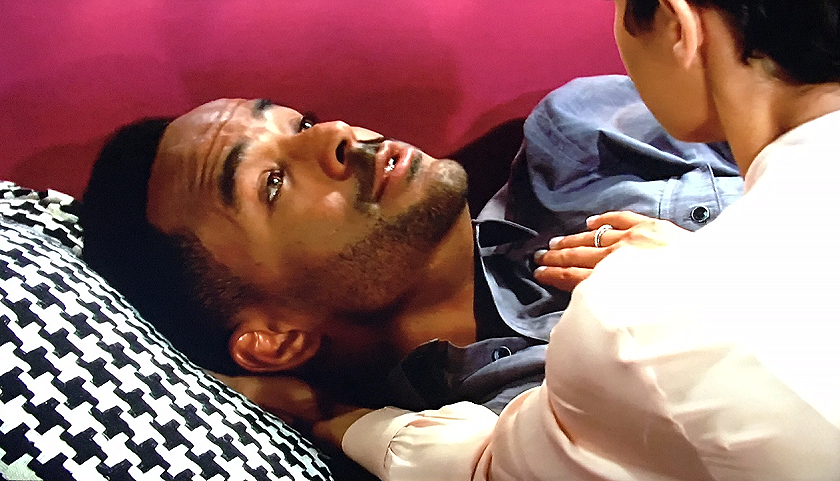 The Young And The Restless (Y&R) scoop for Thursday, June 17 suggests Nate Hastings (Sean Dominic) will ask Elena Dawson (Brytni Sarpi) not to leave town, after she saves his life.

Spoilers tease Abby will tell Devon about her recent phone call with Chance Chancellor (Donny Boaz). She wants to stay positive but is still struggling. Devon will say he has something to give her. It’s a package from Chance. “Give this to Abby when you think she needs it most,” is written in black sharpie. It’s his sweatshirt. A note inside will say when she wears it, he hopes she’ll feel his arms around her.

At Chancellor Park, Sally will tell Tara they need to move fast to get rid of Summer. She’ll advise her of what she’s already got cooked up. It’s a position at a company in Italy. “How am I supposed to trust someone so manipulative and devious?” Tara will ask. Then she’ll say what happens if her plan blows up in their faces. Sally assures her it won’t.

When she arrives at the Abbott estate, Tara will interrupt Summer and Kyle Abbott (Michael Mealor). He’ll go running outside when she tells him Harrison Locke (Kellen Enriquez) is out there playing. Tara will ask Summer if they can chat. Then she’ll ask her if she would do anything to get in the way of the bond between Kyle and his son. Summer will say no. “So I have a proposition for you.”

Meanwhile, Nikki Newman (Melody Thomas Scott) and Victor Newman (Eric Braeden) will arrange for a double date with their daughter and Ashland Locke (Richard Burgi). Although Victoria will be a bit peeved, she’ll still see some humor in it. When he arrives at the Grand Phoenix, Ashland will tell Victoria he feels like a teenager again. Then Victor will show up and immediately start grilling him.

Finally, Nate will be sitting with Moses Winters (Jacob Aaron Gaines) at Society when Elena spots them. She’ll say she hasn’t decided if she’s going to take the job in Baltimore and she needs his advice. Nate will tell her the hospital has a stellar reputation. Then he’ll start clearing his throat and touching his neck. Moses will ask if he’s okay. “I can’t breathe,” Nate will reply. Elena will tell Moses to get an EpiPen right away from the bar.

Nate will recover and Elena will say she guesses he’s allergic to crab cakes. “I’m damn lucky you were here,” he’ll reply. Later, he’ll drop her off at home “You have to do what’s right for you but no, I don’t want you to take that job,” he’ll say. Will Nate reconsider reuniting with Elena?

Today on #YR, Ashland shares shocking news with Victoria, Summer loses patience with Tara, and Sally reconnects with Eric Forrester. Watch the latest The Young and the Restless episodes for free on @CBS or subscribe for more on @paramountplus: https://t.co/biyYJGWHfP pic.twitter.com/Ew0eZXdq3Q