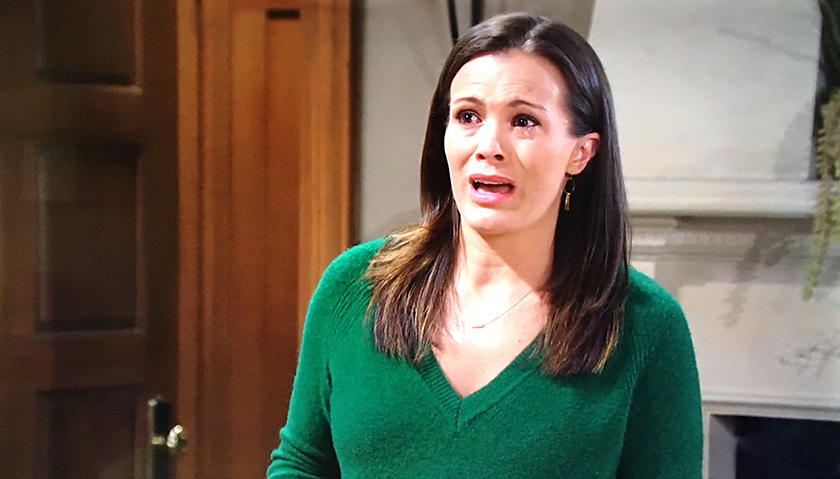 The Young And The Restless (Y&R) scoop for the week of May 10 suggests Chelsea Newman (Melissa Claire Egan) will confess to Rey Rosales (Jordi Vilasuso).

Spoilers tease Jack Abbott (Peter Bergman) and Phyllis Summers (Michelle Stafford) will organize and host Skyle’s engagement party. “To Summer and Kyle,” Jack says in the Y&R preview for next week. “May this be the beginning of a marvelous new Abbott-Newman union.”

Meanwhile, Faith will thank Adam for donating his kidney and the two will share a heartfelt moment. Then they’ll go into surgery. Afterwards, Nate Hastings (Sean Dominic) will give Sharon Rosales (Sharon Case) and Nick Newman (Joshua Morrow) an update. “How’s our girl?” Nick will ask. But will Faith be okay?

Speaking of Adam, he’ll get his own standalone episode this week and it may involve his dreams while he’s undergoing surgery. In the video preview, Billy Abbott (Jason Thompson) taunts him. And Victor Newman (Eric Braeden) tells Adam whatever he does next could dictate the course of the rest of his life.

Finally, Chelsea’s confession has been a long time coming. She hatched a plan to set up Adam for Rey’s poisoning. Chloe Mitchell (Elizabeth Hendrickson) snuck into Rey and Sharon Rosales’ (Sharon Case) home and added thallium poison to all the men’s products.

Of course, Chloe had no idea she was planting poison at Sharon’s house. She just blindly followed Chelsea’s orders, like a good little minion. However, the consequences of her actions could put her away for a long time too. Victor will point this out to Chelsea, telling her Chloe likely “doesn’t want to go to prison and lose her children.” Then he’ll call Rey, asking him to come to the ranch.

“You have to believe me, I am so, so sorry,” Chelsea will say to Rey, as Victor Newman (Eric Braeden) looks on. “Chelsea, are you trying to confess to something?” Rey will reply. But will Chelsea even get the words “I poisoned you” out of her mouth before someone interrupts her?

Chelsea plots her next move today on #YR. pic.twitter.com/1NvEyuwF4S

One Thought to “Young And The Restless Weekly Scoop May 10 to 14: Chelsea Confesses – Summer And Kyle Celebrate – Faith And Adam Undergo Surgery”