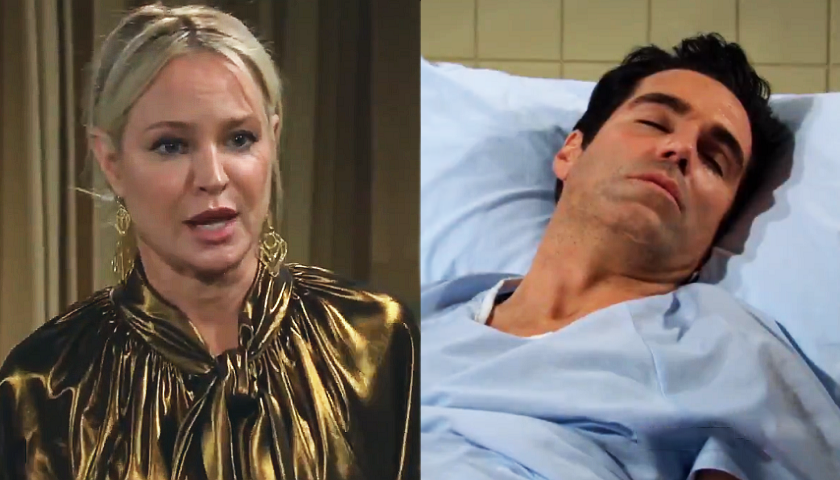 The Young And The Restless (Y&R) scoop for the week of March 22 suggests Sharon Rosales (Sharon Case) will tell her husband to fight.

Also coming up this week, Phyllis Summers (Michelle Stafford) will sense that something is up with her daughter and Naya (Ptosha Storey) will ask Amanda Sinclair (Mishael Morgan) for help. Plus, Jack Abbott (Peter Bergman) wants answers and Teriah will move into the Chancellor Estate.

Spoilers tease Phyllis will lend Faith Newman (Alyvia Alyn Lind) a shoulder to cry on, as she worries about Rey Rosales (Jordi Vilasuso). And she will ask Summer Newman (Hunter King) what she’s holding back. Then she’ll tell her to spill it. Will Summer tell her mother she and Kyle Abbott (Michael Mealor) are engaged again?

Speaking of Kyle, he will be sitting on the hot seat himself when his father asks him what he’s hiding. Jack knows there’s something his son’s not telling him, he just doesn’t know what it is. But will Kyle unburden himself and tell his father the truth about Harrison?

Meanwhile, Mariah Copeland (Camryn Grimes) and Tessa Porter (Cait Fairbanks) will take Abby Newman (Melissa Ordway) up on her offer. The ladies will pack their things and move into the Chancellor estate this week.

At the Grand Phoenix, Amanda’s mother will show up at her hotel room. “My family is in trouble, we need your help,” Naya will say to her daughter. But will Amanda agree to provide any assistance to the woman who gave her up all those years ago?

Finally, Sharon will find out Rey has been poisoned by thallium and he’s seriously ill. Nate Hastings (Sean Dominic) will tell Sharon it’s extremely rare for someone to be poisoned. And later in the week, Adam Newman (Mark Grossman) will accuse Chloe Mitchell (Elizabeth Hendrickson) of setting him up. Does this mean the police will suspect that Adam poisoned Rey?

“We need you to hang on, we need you to fight,” Sharon tells her husband in the Y&R weekly preview. “Don’t you dare leave me okay?” But who poisoned Rey and will he survive?

It looks like a great week coming up! Keep reading The Soap Scoop for more Young And The Restless spoilers and news. And make sure you join our free Facebook Group.

Next week on #YR, Naya asks Amanda for help, Phyllis senses that something is wrong with Summer, Faith worries about Rey, and Adam sees a new side of Chelsea. pic.twitter.com/gAgI2ooe1i