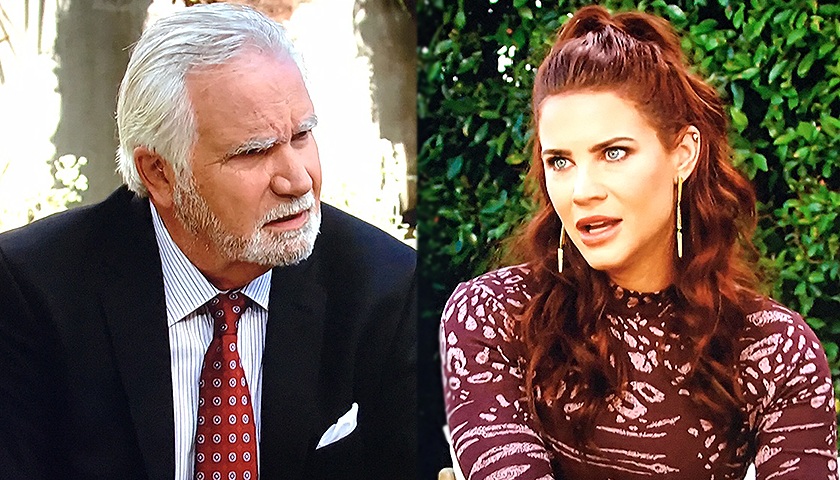 The Young And The Restless (Y&R) scoop for the week of June 14 suggests Sally Spectra (Courtney Hope) will head to LA to see Eric Forrester (John McCook).

Also coming up this week, Summer Newman (Hunter King) will see something upsetting and Victoria Newman (Amelia Heinle) may get hot and heavy with Ashland Locke (Richard Burgi). Plus, Amanda Sinclair (Mishael Morgan) will take matters into her own hands and Sharon Rosales (Sharon Case) and Adam Newman (Mark Grossman) will strike a deal.

Spoilers tease Amanda will continue to be suspicious of her family, especially her grandfather. She’ll call Denise Tolliver (Telma Hopkins). Then she’ll ask Denise to investigate one more thing. “I want to find out why my father was really killed.”

Young And The Restless Scoop – Elena Dawson Wants Another Chance

At the Abbott estate, rumor has it Summer will catch Kyle Abbott (Michael Mealor) red handed with Tara Locke (Elizabeth Leiner). But will they be in each other’s arms? And if so, will Kyle be comforting his ex and will Summer misinterpret the situation?

Speaking of in each other’s arms, the spark between Victoria and Ashland will ignite this week. But first, he’ll tell her he had a doctor’s appointment and got some bad news. He doesn’t have much time left to live. A sympathetic Victoria will ask him if he wants to make the most of every moment he has left. So, will these two hit the sheets?

Other Y&R spoilers show Niktor will be concerned about Victoria’s relationship with Ashland and Elena Dawson (Brytni Sarpi) wants another shot with Nate Hastings (Sean Dominic). Also, Sharon and Adam will come to an agreement. But will Rey Rosales (Jordi Vilasuso) be privy to it? Plus, Christine Blair (Lauralee Bell) will have news about Chance Chancellor (Donny Boaz).

Finally, Sally believes a voicemail message isn’t enough to convince the Bold And The Beautiful’s Eric to hire Summer. So she’ll take it upon herself to fly to Los Angeles. The Forrester Creations CEO will be stunned to see her. “This better not be another one of your schemes,” he’ll tell her.

Sally will implore Eric to hire Summer. She’ll say the director has gone as far as she can at JCV. “Why not go for the gig in Italy yourself?” he’ll ask. Sally will say if she leaves JCV now it wouldn’t look good. “Please Eric, you’ve always been one to give people second chances.” But will Eric agree to help her?

Here’s a sneak peek of what’s coming up on #YR next week. 👏 Tune in to see a familiar face from @BandB_CBS! pic.twitter.com/KCTgsJ2how