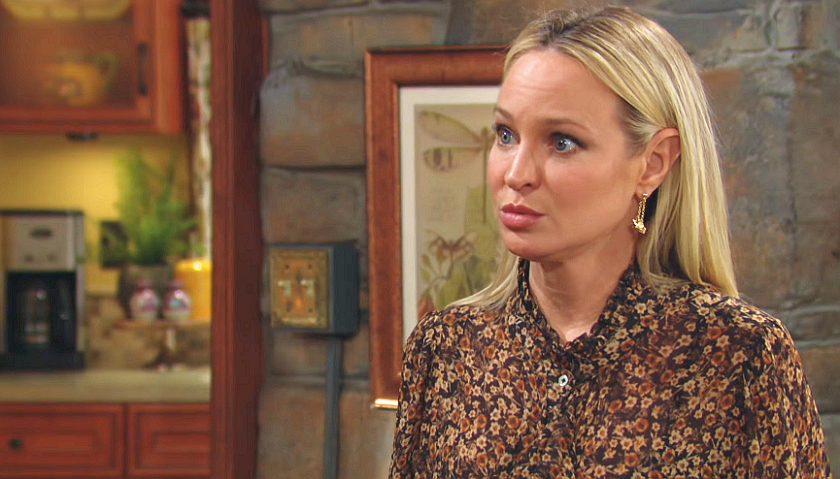 The Young And The Restless (Y&R) scoop for the week of April 19 suggests Sharon Rosales (Sharon Case) will not give up on her marriage.

Spoilers tease Tara Locke (Elizabeth Leiner) will arrive in Genoa City and head straight for Kyle. When Summer Newman (Hunter King) finds her in her fiancé’s hotel room, she’ll be less than pleased. “Uh, what’s going on here?” she asks in the Y&R weekly promo.

Speaking of Kyle, after his conversation with Tara, he’ll decide he wants to confess their affair to Ashland. However, will someone stop him? At around the same time, Jack will be confronting Ashland about the dark rumors circulating about Jabot. But will the Lockeness Monster admit he started them?

After his unpleasant encounter with Jack, Ashland will head to the Newman Ranch. As he tells Victor the deal is off, he’ll clutch his chest and fall back onto the couch. But will Ashland’s health crisis be involved in the secret Victor will later reveal to Nikki Newman (Melody Thomas Scott)?

Meanwhile, Rey has become suspicious of Chelsea Newman (Melissa Claire Egan). On last week’s Y&R, he marveled at how quickly she had suddenly recovered from her stroke. “I’m glad to see your recovery is to the point that you don’t need a nurse,” he told her. This week, he’ll set a trap for the schemer. Will he finally discover Chelsea was the one responsible for poisoning him?

Finally, viewers know Rey told Sharon he was leaving her as soon as Faith Newman (Reylynn Caster) was better. He’s fed up dealing with his wife’s conflicting emotions when it comes to him and Adam Newman (Mark Grossman). Rey has accused her countless times of constantly putting Adam first.

“I’m the idiot who let this go on for so long,” he told her last week. But Sharon will still be stunned when he says he’s leaving. “You wanna go, right now, forever?” she’ll ask. “All I know is that I can’t stay here tonight,” Rey will reply. Then she’ll tell him she wants to save their marriage. But why? All they’ve done since they wed is argue. So, does Sharon truly want him to stay or will she be relieved when Rey leaves?