Y&R spoilers tease Deacon will show up at Nikki’s hotel and she’ll tell him she knows Diane is alive. In fact, she’s returned to Genoa City. She’ll say she wants revenge, but not on him. “You will tell me everything I can use to expose that bitch,” she’ll say. Deacon will tell her he saw Diane a couple of times when she was Taylor Jenson. She was driving a Bentley and there was usually a man in the car.  However, he has something to give Nikki, but she’ll need to come to the restaurant where he works to get it.

Y&R Daily Scoop – A Rattled Diane Lashes Out At Phyllis

At Society, Diane will approach Victor. Phyllis will walk in. “What are you two talking about? Do I have to ask?” Phyllis will say she’s there to get takeout and she’ll leave. Diane will sit down and tell Victor she doesn’t hold any ill will towards him and Nikki. “The feeling isn’t mutual,” he’ll reply. Diane will say she’s doing everything she can to prove she’s not the same person. “I have worked so hard to start over.” But Victor won’t give an inch. 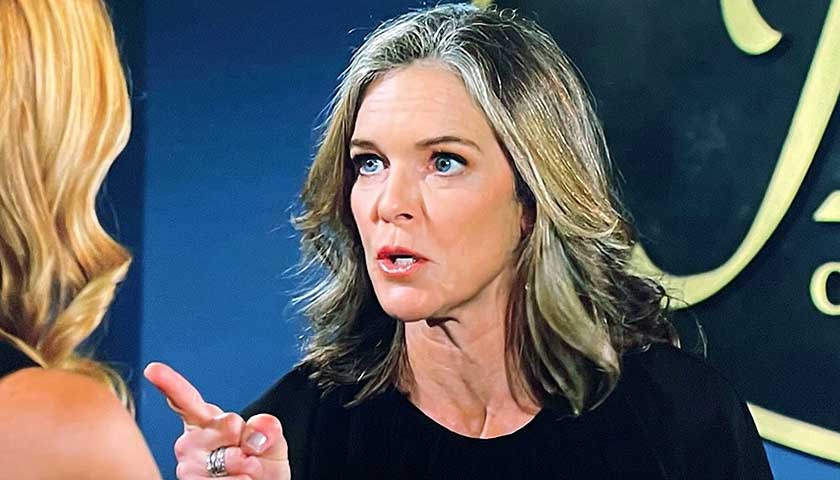 Diane be rattled when she returns to work and she’ll run into Phyllis. “Where do you and Victor get off?” she’ll shout. Diane will say she and Victor have committed countless crimes and gotten away with them. Plus, she’s not the only person who has faked her own death. Victor has also done it, half a dozen times. “I am warning you Phyllis,” she’ll say, pointing her finger at the red head. “You keep pushing me and you will regret it.” But Phyllis will smile and say that’s the Diane she knows and hates. “And this is the beginning of the end for you.”

Meanwhile, Nate will meet Victoria at Chancellor Park. She’ll tell him she could buy up as many shares of Chancellor Winters as possible. But she knows the executive team would retain 51 per cent of the shares. Nate will say he’d be willing to sell her his shares, as long as she agrees to his deal. Victoria will ask him if he’s still part of the inner circle there. He’ll say he will be soon. “So, you’re agreeing to let me run the company once it’s under the Newman umbrella?” Nate will ask. “Consider it done,” Victoria will say and they’ll shake on it.

Young And The Restless Scoop – Nate Apologizes To Lily And Devon

At Chancellor Winters, Lily Winters (Christel Khalil) will try to convince Devon Hamilton (Bryton James) and Billy Abbott (Jason Thompson) to take the company public. “If we go public that’s going to be two huge moves in a matter of months,” Devon will say. Then she’ll send them some stats and Billy will be impressed. But it won’t convince Devon. “There should be more to owning a company than making a profit,” he’ll say.

Finally, Nate will walk in and apologize to Devon and Lily for resigning in anger. “I am here to ask for another chance,” he’ll say. She’ll ask what changed his mind. “I realized I overstepped,” he’ll say. “I wasn’t thinking about my family.” Lily will say she’d love to have him back. Devon will tell Nate if they can put the arguments behind them, then he’s in favor of Nate’s return.