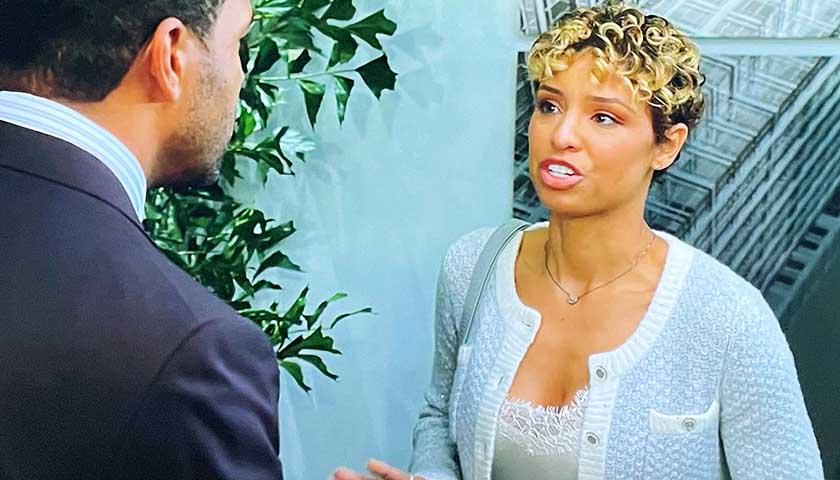 Also coming up, Allie Nguyen (Kelsey Wang) will give as good as she gets. Plus, Billy Abbott (Jason Thompson) will have it out with Chelsea Newman (Melissa Claire Egan) and quit his COO position. And Victoria Newman (Amelia Heinle) will have an unpleasant encounter.

Y&R spoilers tease Audra Charles (Zuleyka Silver) will spot Allie at Crimson Lights and insist on sitting with her. She’ll warn her that Noah Newman (Rory Gibson) goes through moody phases. But Allie will tell her the Noah she knows is funny and kind. Audra will say when she and Noah were together their chemistry was so off the charts, it exploded at times. But it doesn’t sound like it’s a problem for them. Allie will tell Audra she sees right through her. “Nothing you say or imply will ever make me question Noah’s feelings for me.”

At Chancellor Park, Billy will accuse Chelsea of waiting there to ambush his son. “Victoria and I warned you,” Billy will remind her. “You keep pushing for more than you originally asked. You freaked him out.” Chelsea will tell him she was just showing Johnny Abbott (Paxton Mishkind) kindness and compassion. “When I look into Johnny’s eyes, I feel a connection, does he really feel nothing in return?” Chelsea will ask. Then she’ll tell Billy he’s just like Adam Newman (Mark Grossman) and to stop chastising her. “At the end of the day, and above all else, I will protect my children,” Billy will tell her.

She’ll head to Crimson Lights and encounter Elena. She’ll say she’s genuinely sorry if the takeover plans have caused problems in her relationship with Nate. “Victoria, since we’re being honest, are you really sorry?” Elena will ask. She’ll say from where she’s sitting, she looks to gain the most. “Nate knows exactly what he’s doing,” Victoria will reply. “Don’t fault him for learning how to play the game.” But Elena will tell Victoria that calling it a game was all she needed to hear and she’ll leave.

At Chancellor Winters, Billy will tell Lily Winters (Christel Khalil) he’s tried hard to make the job fit but it just doesn’t. She’ll be okay with his decision, but they’ll decide keep his departure a secret for now. Audra, Nate and Devon Hamilton (Bryton James) will arrive. They’ll be close to finalizing the IPO but Elena will walk in. Lily will tell her she can speak freely but Nate will whisk her into the lobby.

Nate will ask her why she’s there. Elena will tell him she’s leaving Genoa City tonight. There’s a position in Baltimore that she’s going to take. She’ll say she can’t ignore what he’s doing to his family. “It’s over. There is no future for us,” Elena will tell him. “I still love the man that is deep down inside. But the one that is obsessed with power…I don’t want him in my life anymore.” Then Nate will walk back into the office and ask to speak to Devon and Lily in private. But is he going to confess what he’s been up to?