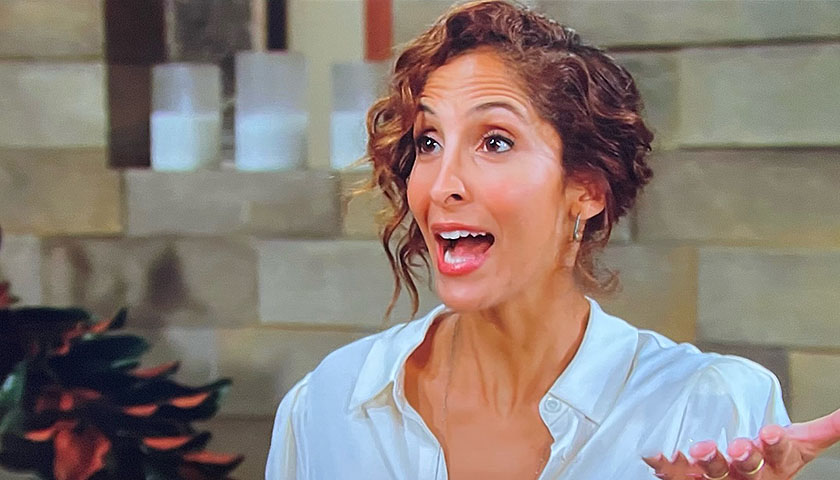 Y&R spoilers tease Tessa and Mariah will talk to Sharon about moving into the vacant apartment upstairs from Crimson Lights. Sharon will joke that they’ll be calling her landlord soon. “How about Grandma?” Tessa will ask. Then they’ll share the news that they’re going to look into adoption. But Sharon will have her reservations and will tell them the adoption process can be long and hard.

Noah will arrive and take Tessa to the patio to show her the artwork for her album cover. She’ll say it’s beautiful and he’ll reply that of course it is, look at what he had to work with. Noah will talk about her passion and her fearlessness. “It’s one of the many reasons I adore you,” he’ll say. “As a friend, like a fanboy.” Tessa will look incredibly uncomfortable and will be relieved when Mariah walks out on the patio.

Meanwhile, Victoria Newman (Amelia Heinle) will reveal what she wants in exchange for staying silent. “You want to use my lawsuit to scoop up Newman Media?’ Billy will ask, incredulously. But he’ll say if Victoria takes over the company, he wants her to name him CEO. Victoria will say she’s willing to “look the other way while the game is afoot, provided you follow through with your threat and file a suit.” And she’ll also take his request under consideration.

Victoria will head to Newman Locke and tell Ashland all about Billy’s scheme and her price for staying silent. Ashland will admire her business acumen. Then they’ll head to the ranch and tell Nikki Newman (Melody Thomas Scott) and Victor Newman (Eric Braeden) that Ashland’s cancer treatments continue to work. When Adam Newman (Mark Grossman) arrives, Victoria will try to bait him by telling him she saw Billy drinking in the middle of the day. “Billy’s not doing anything we haven’t seen before ad nauseum,” Adam will say. “It’s kind of grown tiresome.”

Finally, Lily will tell Billy that she thought his plan was outrageous from the beginning. But now she’s angry. “She wants you to keep putting on a public display of being a relapsing addict so that she can take control of Newman Media.” Lily will also warn him that Victoria is not going to let him run the company, considering he tried to stop her wedding.

“I cannot believe how easily you are giving up on your plans and giving into Victoria’s demands without even putting up a fight,” Lily will say. Billy thinks Victoria will come around. “Oh my God Billy, she’s using you and you’re letting her do it.” Then Victoria will call him and say she’s at the ranch and Adam is there. She’ll tell him his act is barely registering with Adam. “You better up your game.”