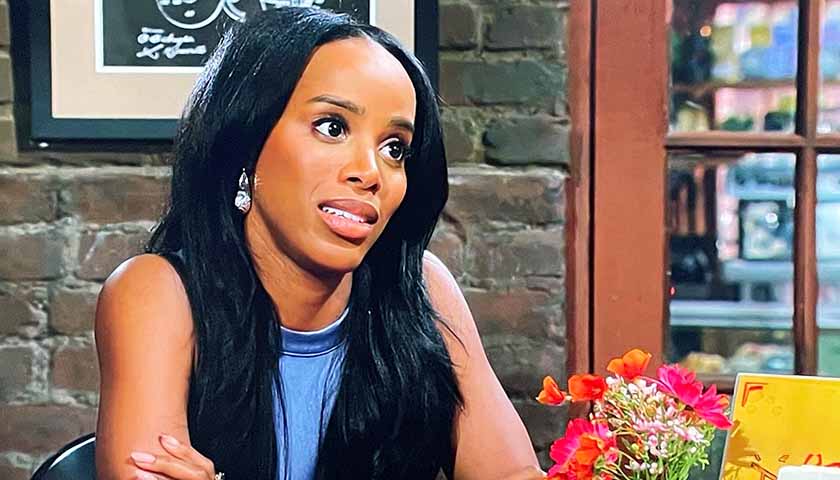 The Young And The Restless (Y&R) scoop for Wednesday, August 10 suggests Imani Benedict (Leigh Ann Rose) will continue to stir the pot.

Y&R spoilers tease Nikki will visit Abby and talk about the investigation into Ashland Locke’s (Robert Newman) death. Abby will say she’s sure it’ll be over soon. “What’s left to investigate?” Then Nikki will talk about how hard it’s all been on poor Victoria Newman (Amelia Heinle). Abby will ask if she wants her to encourage Chance Chancellor (Conner Floyd) to back off the case. “Wouldn’t that be what’s best for everybody?” Nikki will reply.

Y&R Daily Scoop – Phyllis Asks Nikki If She Trusts Her

Meanwhile, Phyllis will run into Billy Abbott (Jason Thompson) and Jack Abbott (Peter Bergman) at Society. Jack will exit and Phyllis will tell Billy she may move on from the Grand Phoenix to work at Marchetti. He’ll immediately suspect she’s got a plan for Diane. “Oh boy, you are definitely up to something,” he’ll say. Then he’ll give her food for thought. Billy will tell her the powers that be at Jabot are shifting. “Brace yourself. Jack offered Adam a job at Jabot.” Then a stunned Phyllis will get a call from Nikki, summoning her to the ranch.

Once she gets there, Nikki will ask her for details about her next move. “Are you saying that you don’t trust me?” Phyllis will ask. “In a word, no,” Nikki will reply. She’s worried that Phyllis could back down out of her concern for her daughter. Speaking of Summer, she’ll run into Diane, who will ask her if Phyllis’ bit career move is “directly tied to her hatred of me.” However, she’ll tell Summer she doesn’t have to worry about her. Then Summer will warn her. “Don’t attempt to manipulate Jack as you have in the past,” she’ll say. “And if you do pull anything at all, you’ll have to contend with me.”

At Chancellor Winters, Elena Dawson (Brytni Sarpi) will tell Devon she’s concerned about his relationship with Nate Hastings (Sean Dominic). She’ll ask if there’s anything she can do to heal the rift between them. Devon will admit he shouldn’t have just thrown Nate into the deep end. He’ll also say he laid out the hierarchy but Nate is reluctant to embrace it. “Which is now causing me to wonder if I made a mistake bringing him on board.”

Young And The Restless Scoop – He Needs To Do Something Bolder

Finally, Nate will run into Imani at Crimson Lights. She’ll apologize for having to leave town. But Nate will say the company is all about family and they stick by each other. “I keep getting the feeling maybe yours isn’t sticking by you,” she’ll reply. Nate will tell her Devon is worried he’s a liability to the company and thinks he’s some sort of screw up. But Imani will tell him he has a lot of potential. “Maybe Devon is threatened by that.”

Then Nate will suggest Devon could be right and he needs to play the game. However, Imani will advise him the last thing he needs to do is take a step back. “You need to turn up the heat,” she’ll continue. “Devon doesn’t value what you bring to the work.” Imani will remind him of the bold step he took at the launch. “You need to do something like that again but bigger and bolder.”