Y&R spoilers tease Adam Newman (Mark Grossman) will tell Victor Newman (Eric Braeden) he got a job at Jabot. “This is a retaliatory move,” Victor will say. “I thought you were done seeking vengeance?” Then he’ll say it’s a huge mistake. “It’s a family business, you’ll be an outsider.” Adam will roll his eyes and say he felt like an outsider at Newman. He believes leaving is best for both of them. “I treat you no differently than I treat Victoria, Nicholas or Abby,” Victor will retort. Adam will tell his father he now knows why his mother made the decision to walk away. “You can’t even be happy about my new venture.”

At Crimson Lights, Faith will tell Sharon Rosales (Sharon Case) and Nick Newman (Joshua Morrow) that she’s just about ready to head out. Sharon will get emotional and Faith will tell her she’s just going to be on the other side of the lake. Mariah Copeland (Camryn Grimes) and Tessa Porter (Cait Fairbanks) will arrive with a gift for Faith. Then they’ll say some tearful goodbyes and Faith will head out with her parents. 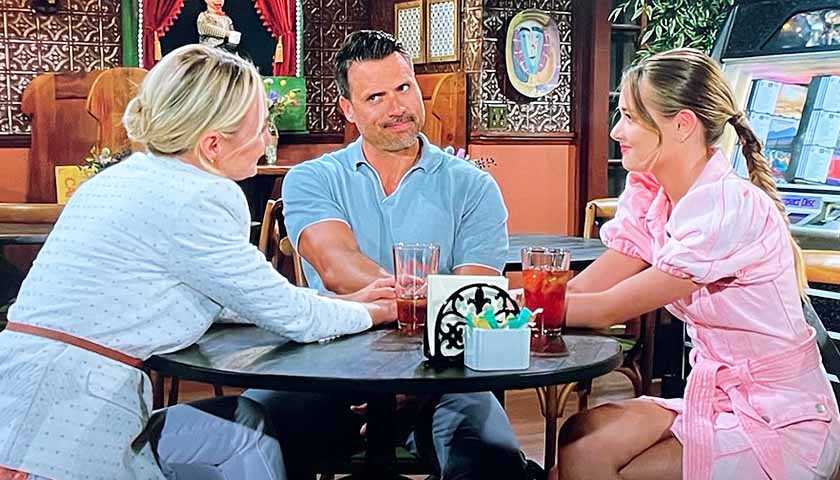 Meanwhile, Nate will be happy to see Imani is back in town and he’ll invite her to lunch at Society. She’ll ask him if there’s still tension with Devon Hamilton (Bryton James). Nate will say it’s gotten worse. He’ll tell her about his music festival idea and how Devon immediately put the kibosh on it. Then Imani will say that with Devon out of town, he needs to make a move that can’t be ignored. But Nate won’t be so sure. “You need to make sure that Devon knows exactly what you bring to the table,” she’ll advise him.

Over at Chancellor Winters, Lily will ask Elena how Nate is doing. She’ll say she’s worried about him. Elena will tell her Nate thinks Devon doesn’t respect him. Lily will say they both take a different approach to business. However, Elena will admit she suggested to Nate that he quit. “If it’s making him that miserable then what’s the point?” But Nate told her he made a commitment to his family and he’s staying put.

Young And The Restless Scoop – Billy Blames Adam For Everything

At Chancellor Park, Billy Abbott (Jason Thompson) will encourage Chelsea to reconsider doing the podcast. He’ll tell her she doesn’t need him, she has a gift. But she’ll say he should reconsider as well. Then Chelsea will tell him she doesn’t know why she got so off track in her life. “Is that a rhetorical question?” he’ll ask. “Because I think the answer is very obvious. Adam.”

Speaking of whom, after Billy leaves, Adam will spot Chelsea and say hello. “I was just thinking about you,” Adam will say. “I was wondering if you had any plans lined up.” Chelsea will tell him that indeed she does. “I want to go visit my mom in Minnesota and I want to take Connor with me,” she’ll reply. And Adam will not look pleased about her plans at all.