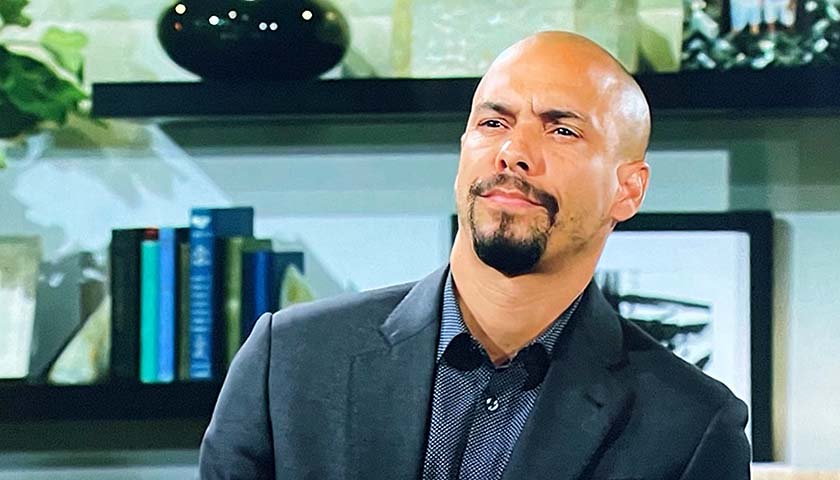 The Young And The Restless (Y&R) scoop for Tuesday, October 4 suggests Devon Hamilton (Bryton James) will sense something is still off with Nate Hastings (Sean Dominic).

Also coming up, Nate and Elena Dawson (Brytni Sarpi) will have an unpleasant encounter. Plus, Victor Newman (Eric Braeden) will find out Tucker McCall’s (Trevor St. John) in town and will pay him a visit. And Diane Jenkins (Susan Walters) is done spying on the Abbotts.

Y&R spoilers tease Nick Newman (Joshua Morrow) will tell Victor that Tucker crashed Kyle Abbott (Michael Mealor) and Summer Newman’s (Allison Lanier) renewal ceremony. Victor’s eyes will widen but Nick will say they can discuss him later. “Are we still seriously going to make a play for Chancellor Winters?” he’ll ask. But Victor will interrupt him. “Wait a minute, what if they’re connected?” Victor will say. Victoria Newman (Amelia Heinle) will agree. Tucker must be involved somehow.

Meanwhile, Diane will barge into Tucker’s hotel room. “You choreographed that entrance for Ashley alone and she wasn’t even there,” she’ll say. She’ll tell him she wants to end their partnership and to stop calling and texting her. “Are you saying I’m dead to you?” Tucker will quip. “Isn’t that ironic.” 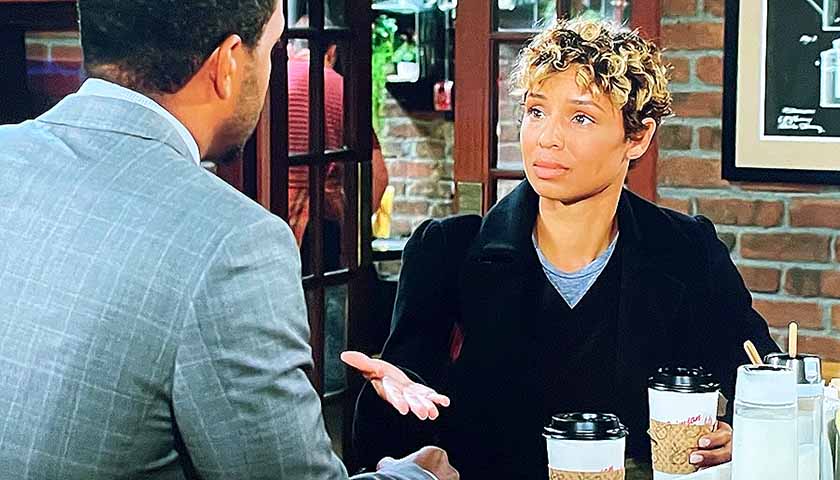 He’ll say he needs her to be his eyes and ears inside the Abbott household. Diane will ask him what happens if she refuses. “Are you threatening me?” But Tucker will say he’s just reminding her she wouldn’t have made progress with her son or grandson if it wasn’t for him. She’ll tell him she can’t risk anyone finding out. Then there’ll be a knock on the door and then they’ll hear Victor calling Tucker’s name.

At Crimson Lights, Elena will run into Nate. He’ll ask if her time alone has helped her see things from his perspective. “I have realized that something in you has changed and I don’t like it,” she’ll reply. Nate will ask her what she means. “This job has brought up a side of you that is power hungry. And has the potential to hurt a lot of people.” He’ll say making things happen takes guts and vision and often requires sacrifice. Elena will say she’d love to hear what he’s willing to sacrifice. “Your morality, your family, your relationship?” He’ll say he wishes she understood him. “You see I do understand you,” she’ll reply. “That’s what makes this so hard.”

Young And The Restless Scoop – Devon Has Questions For His Cousin

Then Devon will walk in as Nate departs and he’ll tell Elena she clearly needs to talk to someone. She’ll say she doesn’t recognize who Nate is anymore. “His goodness, his compassion has all been replaced by this hunger to prove himself.” Devon will encourage her to open up. He’ll say if she’s got a problem with Nate, he feels like he’s to blame. “This isn’t just about what you’ve done,” she’ll say. “It’s much bigger than that.” Devon will ask if she’s talking about Nate’s transition into the corporate world, or if it’s something else. And Elena will scramble to leave the café.

Back at the office, Devon will ask Nate why he wasn’t honest with him earlier, when he’d asked if everything was okay. He’ll say he just had a conversation with Elena. Nate will look worried and will ask Devon what Elena told him. But he’ll say she’s just concerned about him. Nate will lie and tell Devon that Elena’s still focused on the past and he’s looking forward. Then he’ll get a text from Victoria asking to meet. But as Nate leaves the office, Devon will look like he doesn’t believe a word his cousin just said.