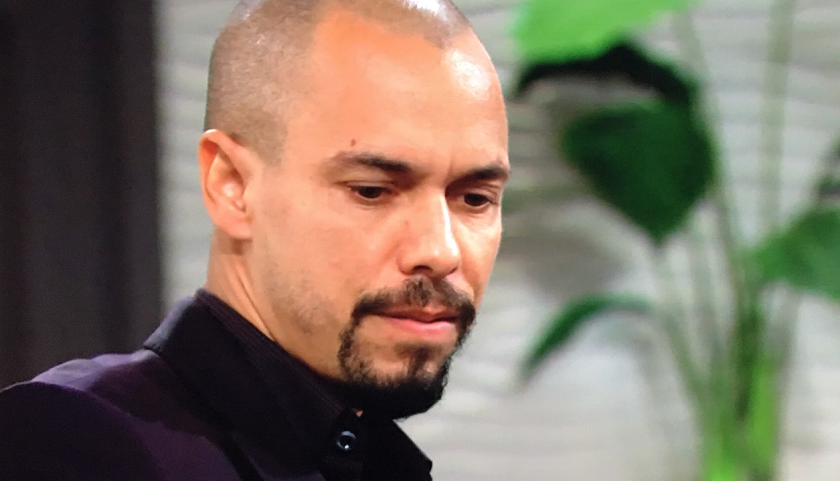 The Young And The Restless (Y&R) scoop for Tuesday, October 20 suggests Devon Hamilton (Bryton James) will find out the truth about his girlfriend and his cousin. And his reaction will be epic.

Also, Gloria Bardwell (Judith Chapman) will return home with a secret and Phyllis Summers (Michelle Stafford) hosts the Chamber Of Commerce Business Person Of The Year event at the Grand Phoenix.

Kevin will tell his mother to keep her voice down and then ask her why she’s back. “Oh, nice to see you too, Kevin,” she’ll say, as she coos over her grandson. Rumor has it, Gloria’s got something up her sleeve and it’ll turn out to be a bombshell secret.

Meanwhile, Lily Winters (Christel Khalil), looking stunning in a silver gown, will ask Billy Abbott (Jason Thompson) if he’s going to the Grand Phoenix.  He’ll say he declined, due to a death in the Abbott family. Then Billy will head to the Abbott estate to talk to his brother Jack Abbott (Peter Bergman).

Phyllis will be busy making sure everything’s in place for the big event, while Nick Newman (Joshua Morrow) mingles. Amanda Sinclair (Mishael Morgan) will gaze at Devon as Nate Hastings (Sean Dominic) does the same when he spots Elena Dawson (Brytni Sarpi). He’ll even walk up to Elena and hit on her, right after he tells Devon that if he ever needs to talk about anything, he’s there for him.

Nick will congratulate Devon on his accomplishment and will mention to his friend how frazzled Elena was when he’d shown up at the clinic to drop off some supplies. He’ll say she and Nate had just saved a kid’s life. “Maybe she was just trying to put it out of her mind,” he will say.

Devon will accept his award and make a speech. He’ll thank his two late parents and his grandmother, who all set an example for him. Devon will then mention Elena and Nate, who “have poured their hearts into running the clinic. So I share this award with them.”

Afterwards, Devon will ask Elena why she hadn’t mentioned how a kid had almost died of a drug overdose at the clinic. “Listen, I didn’t tell you this because I knew it would be a big deal but the kid was Jared,” she will respond. When Devon asks her why she didn’t tell him, she’ll run off and he will follow her to their suite. Then she’ll confess that she and Nate lost control. “I hate myself. I slept with Nate.”

Devon will storm out of the room, slamming the door and leaving Elena alone and weeping. He’ll head to the lobby where he’ll clock Nate in the side of the head. It looks like another great episode is coming up. Keep reading The Soap Scoop for more Young And The Restless spoilers and news. And make sure you join our free Facebook Group.