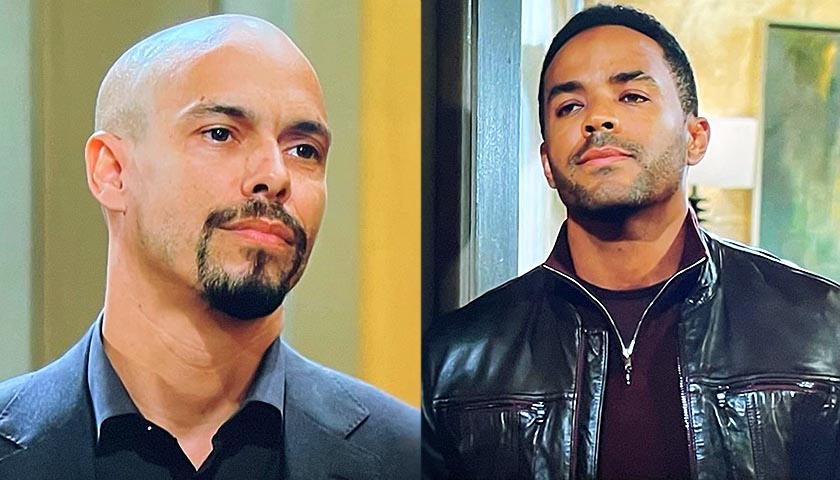 Y&R spoilers tease Sally will sit in her office, thinking about both Nick and Adam Newman (Mark Grossman). Summer will show up, close the door and sit down. Then she’ll ask Sally what’s going on between her and Nick, because she saw her in father’s arms at Crimson Lights.

Sally will tell her she and Nick are just friends. Summer will say she hopes so, because the idea of her dating Nick is disturbing. “The point is that my dad deserves better, much better,” Summer will continue. “The last thing he needs is to be pulled into your train wreck of a life.” Later, Summer will meet up with her father at Society and ask him if he’s seeing Sally. He’ll tell her they’re just friends but she won’t be sure she believes him.

At Crimson Lights, Sally will be surprised to see Connor sitting by himself. “Get to Crimson Lights. ASAP,” she’ll text Adam. “It’s Connor.” Then she’ll sit down with him. “My dad was always in a good mood when he was with you,” he’ll say and she’ll smile. Then Connor will tell her he was out with his mom but told her to drop him off. Sally will say it’s normal for kids and parents to argue. “This is different, mom thinks we’re fine but we’re not,” he’ll confide, just as Adam arrives.  “Not anymore.”

Meanwhile, Devon will tell Lily Winters (Christel Khalil) that Tucker McCall (Trevor St. John) swore up and down he wasn’t trying to go after Chancellor Winters. Lily will ask if he believes him. He’ll say he doesn’t know what to believe. However, Devon thinks the smart thing to do is to pull the plug on the IPO. Lily will say it’s not up to her, it’s up to Jill Abbott (Jess Walton). “Half of this company is called Winters,” Devon will reply. “If Jill still insists on going public, tell her to talk to me.”

Young And The Restless Scoop – Nate Tells Victoria He Confessed

At Newman Enterprises, Nate will admit to Victoria their plan has been exposed. He confessed the whole thing to his family, because Elena broke up with him. But he realized Elena was right. “I didn’t want to lose my family. Now here I am having lost them all.” Victoria will say she’s sorry their plan has cost him so much. “I never revealed your identity,” he’ll tell her. However, he needs to get his family back. She’ll say she thinks she has a way to reward his loyalty. Then later, Victoria will tell Nick the takeover deal is off, and she wants to replace Sally with Nate. “I do not like this move,” Nick will say. “Not now and not like this.”

Finally, Nate will return home to his empty apartment. There’ll be a knock on the door. It’s Devon. “Now that it’s just the two of us, I’m going to need for you to help me understand,” he’ll say to his cousin, as he walks in. “What the hell is wrong with you? And why you’d wanted to screw us over the way you did.” Nate will ask what the point is of explaining things now. “This is your opportunity to explain things to me and come clean,” Devon will tell him.

Young And The Restless Poll: Who Should Sally Be With – Adam Or Nick? #YoungandRestless #YR #YoungandtheRestless #Ally #Snick https://t.co/fjV4OoGV6N