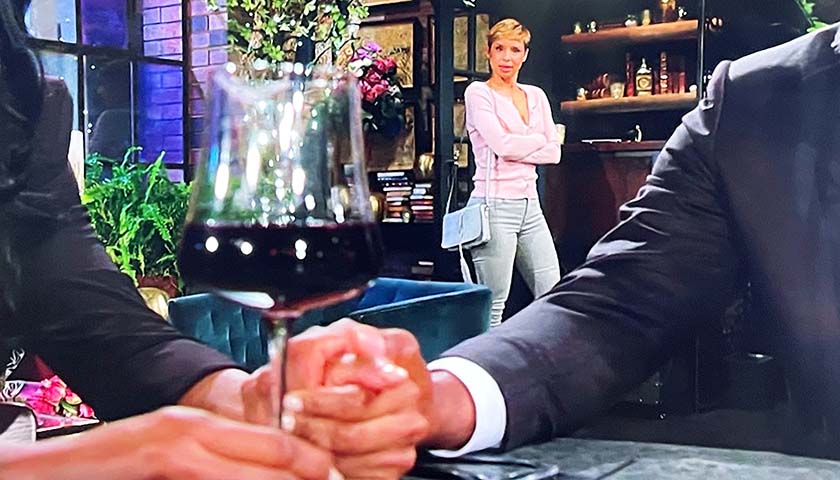 The Young And The Restless (Y&R) scoop for Tuesday, May 24 suggests Nate Hastings (Sean Dominic) will provide some comfort to Imani Benedict (Leigh Ann Rose).

Y&R spoilers tease Adam will get a call from Victor Newman (Eric Braeden). His father will tell him Victoria Newman (Amelia Heinle) is going on vacation. He’ll worry that the trip will be an obstacle for he and Sally. But she’ll say that perhaps it’s a blessing in disguise. They’ve only just laid the ground work for their plan. Later, when they’re in bed at The Grand Phoenix, Adam will tell Sally they need a crisis, to avert Victor’s attention. But what will they come up with?

At Crimson Lights, Sharon will spend time with her ex and their son. She’ll talk about Rey Rosales (Jordi Vilasuso) and get a little maudlin. But Nick will lift her spirits by getting silly and making some milkshake moves behind the bar. Then Nick and Sharon will talk about Faith Newman (Reylynn Caster) going off to college soon. “I’m gonna miss her like crazy,” Sharon will admit. Nick will tell her she’ll always have him. He’ll say she can come over and hang out with he and Christian anytime. “Really? I might just take you up on that,” Sharon will reply.

Meanwhile, Nate will head to Society and sit down with Imani and Amanda Sinclair (Mishael Morgan). They’ll tell him they got some concerning news about their mother. The doctor will call and Amanda will get up. Imani will talk about her bond with her mother and how afraid she is. “I just can’t stand the thought of losing my mother,” she’ll say. Nate will take Imani’s hand in his and Elena Dawson (Brytni Sarpi) will walk in and glare.

But she’ll paint on a smile and head over to the table. Nate will say Imani has just gotten some troubling medical news about her mother. He’ll get up to leave and Elena will join Imani and Amanda. Imani will then ask Elena why she and Devon Hamilton (Bryton James) broke up. “I never heard that juicy part of the story,” Imani will say. Amanda will try to shush her sister but Elena will fess up about how she and Nate crossed a line. “I think everything worked out the way it was meant to,” she’ll admit.

Over at Chancellor Industries, Nate will return to a meeting with Devon, Billy and Lily Winters (Christel Khalil). They’ll discuss the launch and Nate will talk about how great it is working with family. Billy will suddenly get very quiet. After they leave, Lily will ask Billy if he’s okay with the merger. He’ll say he’s fine with it but will then launch into a podcast about insecurity.

Finally, Nate will arrive home to find Elena half asleep. She’ll snap out of her dose and tell him to keep his eyes open. “Imani is definitely after you.” Nate will say she’s a harmless flirt. “She certainly loved having you comfort her today,” Elena will reply. Nate will tell her she has nothing to worry about. But does she?

Young And The Restless Scoop May 23 To 27: Nikki And Diane's Brawl – Lily Puts Billy On The Spot – Adam And Sally Plan Their Next Move #YR #YoungandRestless #YoungandtheRestless https://t.co/1DqWqMQKHO