Y&R spoilers tease Chloe and Chelsea will bicker about their new line. Chloe will tell her friend they’re up against the clock and she needs to work faster.  They’ve already missed some deadlines and are losing materials. “You can’t rush creative inspiration,” Chelsea will say. Chloe will warn her that Lauren could kick them to the curb.

Chelsea believes the line will be so amazing that Lauren won’t care if it’s late. “I am here to protect you, even if you are a pain in the butt sometimes,” Chloe will say. Gloria Bardwell (Judith Chapman) will approach and say she senses the tension between them. “I’m a survivor, I’ve been doing this a long time but I’m still here,” she’ll advise them. “You’ve got to harness this negativity I am picking up on and turn it into some positive energy that’ll send you both rocketing to new heights.” 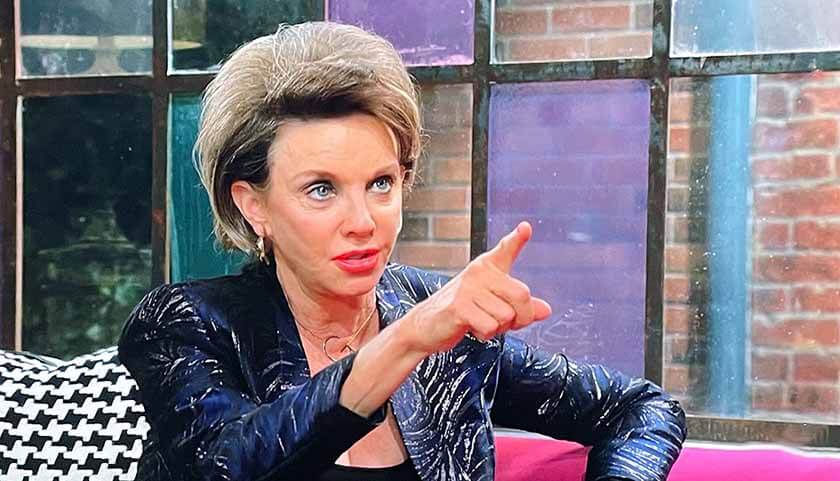 Meanwhile, Summer and Kyle will discuss the Marchetti CEO position. Kyle’s not sure if he wants to leave Jabot. Summer will point out he wouldn’t really be leaving since Jabot will own Marchetti soon. “I’ll take the job, I’m in,” he’ll tell Summer. Lauren will arrive and Kyle and Summer will pitch the idea of hiring Chelsea as Marchetti’s lead designer. Lauren will be slightly concerned as Chelsea is working for Fenmores. “Maybe Chelsea could pull double duty,” Kyle will say.

He’ll realize he needs to pick up Harrison Locke (Kellen Enriquez) and will take off. Talk will turn to Phyllis and Diane. Summer will have no idea that Phyllis is already back in town. And she’ll tell Lauren she wants to keep her mom as far away from Diane as possible. But Lauren has another idea. She’ll remind Summer that Diane wants to make amends. “Get her to apologize or make amends to Phyllis,” Lauren will suggest. “That could be the only thing that calms Phyllis down.”

Young And The Restless Scoop – Phyllis Walks In Wearing A Disguise

Finally, Diane will spot Jack chatting with Allie Nguyen (Kelsey Wang) at Crimson Lights. She’ll say hello and Allie will say she needs to meet up with someone. Diane will sit down with Jack and she’ll talk about making amends. “Maybe over time even those I’ve wronged the most will be willing to see that I’ve changed,” she’ll say. “Is it wrong to put you in that category?” Diane will admit however that there’s one person who will probably never forgive her and that’s Phyllis. Then, right on cue, Phyllis will walk in, wearing a  disguise.

Phyllis will immediately back up and head to the patio and stand close enough to eavesdrop. She’ll hear Diane asking Jack if he’s hoping to work things out with Phyllis when she gets back. “No,” Jack will reply. “We tried and that ship has long since sailed.” Diane will say it’s a relief to hear it. “It just never worked out between the two of you,” she’ll continue, as a stunned Phyllis listens in. “Quite simply, you deserve better than Phyllis.”