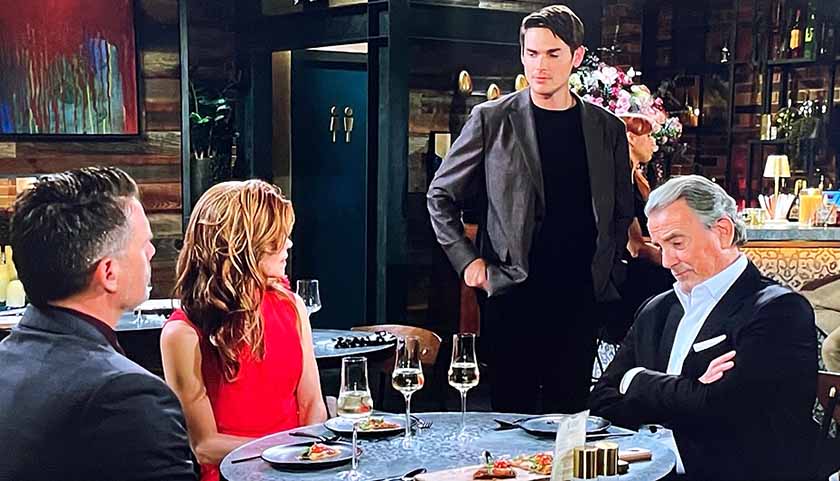 The Young And The Restless (Y&R) scoop for Tuesday, August 30 suggests Adam Newman (Mark Grossman) will tell his family he had an epiphany.

Y&R spoilers tease baby Dominic’s first birthday party will be sparsely attended. Abby, Chance, Mariah, Tessa and Devon Hamilton (Bryton James) will be there. It looks like no other Newmans, Abbotts, Chancellors or otherwise, were invited. Regardless, everyone will fawn over Dom. Abby will ask them to write down their favorite memory of him to put in a time capsule. She plans to give it to him at his 18th birthday party, which will probably take place three or four years from now.

After everyone leaves, Abby will ask Chance why he’s being so quiet. He’ll say he’s still worried about closing the Ashland Locke (Robert Newman) case. Then he’ll get called away on a case. Devon will return and Abby will say she’s worried about Chance. She’ll tell Devon she feels as though he isn’t putting their family first.

Meanwhile, Sally will follow Adam and Chelsea to Crimson Lights. At first, she’ll eavesdrop. Then she’ll approach them and she’ll walk away after they shut her down. When Adam heads out to talk to Jack Abbott (Peter Bergman), Sally will slide into the booth across from Chelsea. “Well you certainly didn’t waste any time,” she’ll say. Chelsea will say that what she and Adam have has lasted for years. “We are finally in a great place…and I’m not going to let you get in the middle of that,” she’ll tell Sally. “So whatever’s going on between Adam and me, friendship or otherwise, it’s not really any of your business.”

Then Crimson Lights’ resident therapist Sharon will ask Sally what happened. She’ll tell Sharon Adam seems to be on a new path. “What new path?” she’ll ask. “He’s out to get his father.” Sally will say she gets it now. “Victor will always be his primary relationship.” After Sally departs, Mariah and Tessa will tell Sharon that after attending Dom’s birthday party, they’ve decided to go full steam ahead with their adoption plans.

Young And The Restless Scoop – Nick Hopes Adam’s Being Truthful

At Society, Nick Newman (Joshua Morrow), Victor Newman (Eric Braeden) and Victoria Newman (Eric Braeden) will order an expensive bottle of champagne and toast each other. Adam will watch them from outside.  “We’ll isn’t this cozy,” he’ll say, as he walks over to their table. Then he’ll offer to pay their bill. Adam will tell them he had an epiphany and he’s not coming after the family anymore. Victoria won’t believe it.

But Nick just might. He’ll join Adam at the bar after his father and sister leave and will ask if his epiphany is real. Adam will say it is. “None of my anger issues are with you,” Adam will add, all his anger is reserved for Victor. Then he’ll warn Nick that one wrong move and Victor will come after him too. “Just remember this,” he’ll tell Nick. “As much as dad’s instinct is to protect us, by covering up Agent Montalvo and Locke’s deaths, what he did prevented us from processing the consequences of our actions.” Adam will say it meant he had to bury his feelings. “Taking a man’s life is not easy to forget.”