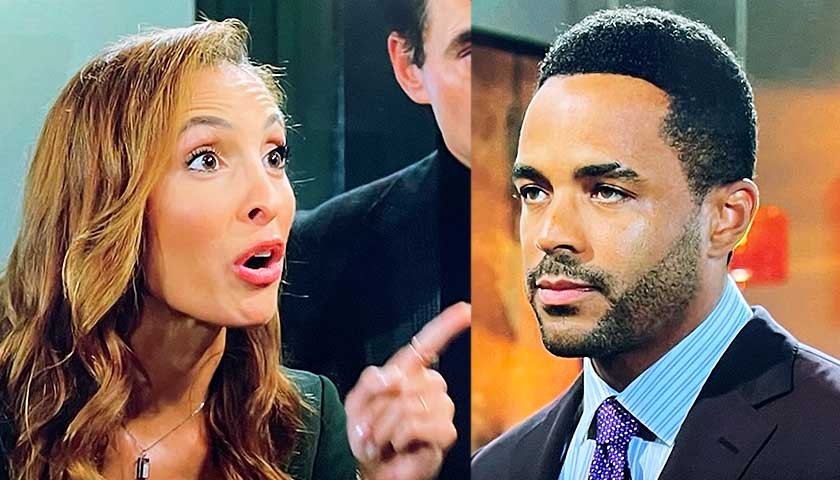 The Young And The Restless (Y&R) scoop for Thursday, October 13 suggests Nate Hastings (Sean Dominic) will admit to his takeover scheme.

Also coming up, Devon Hamilton (Bryton James) will accuse his father of trying to acquire Chancellor Winters. Plus, Sally Spectra (Courtney Hope) will get a surprise when she thinks she’s meeting Nick Newman (Joshua Morrow) for dinner. And Ashley Abbott (Eileen Davidson) will agree to share one meal with Tucker McCall (Trevor St. John).

Y&R spoilers tease Ashley will show up at Jabot and will not be happy to see Tucker there. He’ll remind her she said the only way he could win her back would be if he changed his ways. “And I have changed,” he’ll say. Then he’ll ask her to meet him for dinner at Society. Ashley will tell him she’ll share one meal with him, so he’ll stop stalking her.

At Newman Media, Sally will tell Chloe Mitchell (Elizabeth Hendrickson) that she and Nick Newman (Joshua Morrow) have decided to just enjoy their moments together. Chloe will be happy for her and later, she’ll hand Sally an invitation that arrived. Sally will open it up. It’s an invite to dinner on the Grand Phoenix rooftop and it’s signed N. When she gets there, she’ll smile, pour herself some champagne and will be stunned when Adam arrives. 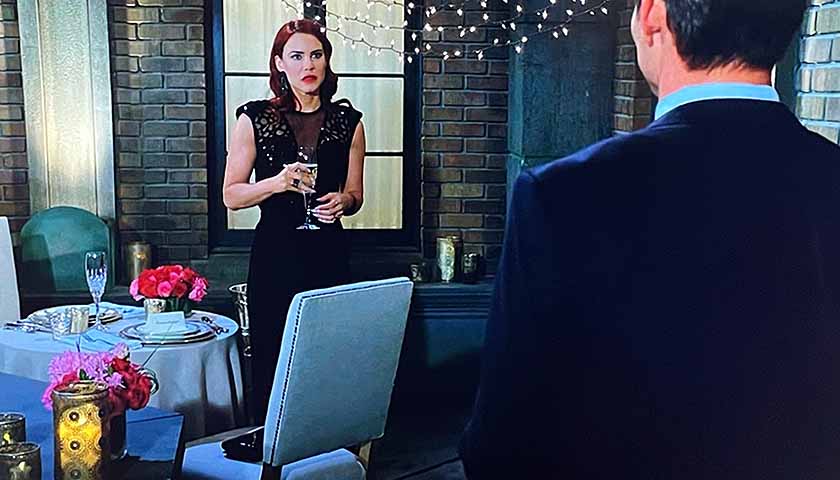 Meanwhile, Nate will tell Devon, Lily Winters (Christel Khalil), Audra Charles (Zuleyka Silver) and Billy Abbott (Jason Thompson) he hasn’t been operating in good faith. “I’ve been meeting in secret with the CEO of another company, sharing what I know,” he’ll admit. “This is about you and me isn’t it?” Devon will ask. Nate will tell him he’s wrong. He’ll say he had one goal, creating an opportunity. Devon will guess the CEO promised to put him in charge. “At least be honest about your intent,” he’ll say furiously.

Then he’ll say it’s amazing that Nate would do all that just because of issues between the two of them. “The nerve for you to stand there and say I don’t give you opportunities when I literally handed you this position as my second in command.” And he’ll ask Nate who he’s working with, but Nate won’t reveal the CEO’s identity. Devon will suspect it’s Tucker and head towards the door. “You know this goes without saying, you’re fired,” he’ll tell Nate.

After Devon storms out, Lily will ask Audra to hold off on filing the IPO paperwork. And then she’ll turn to Nate. “Do you know what’s funny?” she’ll say to her cousin. “We were doing this IPO so we could pursue our collective vision. That included you.” If he had gone through with it, the company would have been led by someone else’s vision. “They would have been the majority shareholders and they would have pushed us out,” Lily will say. “And what Katherine built, and Devon and your uncle, what they all built would have been taken away from us.” Nate will say that he felt like he wasn’t a priority and Lily will tell him to get out.

He’ll head back to the penthouse and be relieved to see that Elena Dawson (Brytni Sarpi) hasn’t left for Baltimore yet. Nate will tell her what happened and that he did it for her. But Elena will not look all that pleased. Finally, Devon will walk into Tucker’s hotel room and say he has one question for him. “Did you come back to Genoa City to go after Chancellor Winters?”