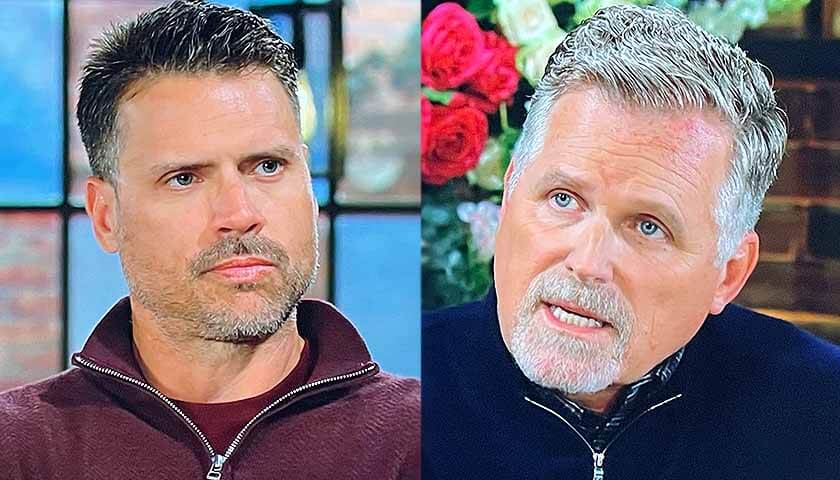 Y&R spoilers tease a frazzled Chelsea will show up late to her meeting with Chloe. “This is about Rey, isn’t it?” Chloe will ask. “His death is clearly hitting you harder than you want to admit.” Then she’ll ask her how close she and Rey had become.  “He encouraged me, he inspired me, Chelsea will reply. She’ll say he gave her hope and now that he’s gone, so is her hope. “You we’re falling in love with Rey, weren’t you?” Chloe will blurt out. However, Chelsea will take offence and say she wasn’t in love with Rey, he was happily married to Sharon.

At Crimson Lights, Victoria Newman (Amelia Heinle) will run into Ashland. “What are you still doing here?” she’ll ask. “Please don’t tell me you’re harboring some sort of delusion that I’m going to forgive you.” Victoria will tell him thanks to the money her father gave him, he can reinvent himself again. She’ll pass Adam Newman (Mark Grossman) as she leaves. He’ll want to talk to her but she’ll brush him off, as usual.

Adam will stroll over to Ashland’s table and inform him Nikki Newman (Melody Thomas Scott) is now co-CEO at Newman Locke. Ashland will comment that Victoria has rejected them both. “Don’t try to compare us,” Adam will say. “You broke her spirit.” He’ll tell Ashland he’s never going to clear his actions in Victoria’s heart so he may as well give up trying. But Ashland’s not about to do that anytime soon. Instead, a lightbulb will go off. He’ll text Nick and ask if they can talk.

Meanwhile, Sharon will hang out with Nick at her house, as she continues to grieve. Then Tessa, Mariah Copeland (Camryn Grimes) and Noah Newman (Rory Gibson) will walk in. Tessa will say her sister has been cleared of all charges, thanks to Rey. He convinced Michael Baldwin (Christian Le Blanc) there wasn’t enough evidence for a conviction. Plus he found the people who were after her and had them arrested. Sharon will be touched and will say she wants to hold a memorial for Rey. There’s just one hitch – she wants to do it today. Nick will get the text from Ashland and Sharon will tell him he should go.

Young And The Restless Scoop – Victoria Thinks He Should Take It

At Society, Ashland will say he has something to offer Nick, no strings attached. He wants to donate half the money he got from Victor to New Hope. But Nick will say he doesn’t want his blood money. “I am offering it to you and asking nothing, with one caveat,” Ashland will continue. “I would ask that all the work be done in the name of detective Rey Rosales.” Nick will say if he’s looking for some kind of redemption, he doesn’t want to give it to him. Ashland will tell him to think about it.

Nick will head to Newman and tell Nikki and Victoria about Ashland’s offer. “How dare he take advantage of Rey’s death to clear his name!” Nikki will exclaim. Nick will agree and say he shouldn’t be able to buy his way back into everyone’s good graces. But Victoria will have a different take. “I think it’s obvious,” she’ll say. “Nick needs to take every penny of that money.” However, will Nick take Ashland up on his offer?