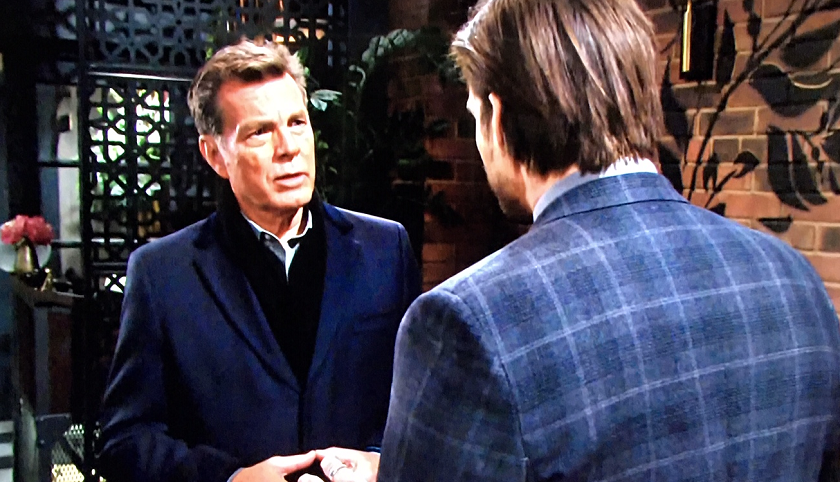 Even though Jack told Kyle he needed to work on his marriage and stop blaming Theo for every problem he and Lola Abbott (Sasha Calle) had, it looks like he’ll suddenly do an about face. Viewers can expect Jack to tear Kyle’s cousin a new one, when he sees Lola leaning against Theo through a window at Society.

“What the hell are you doing?” Jack will say. “Let’s not pretend you didn’t see an opportunity there and take full advantage of it. ” Of course, Theo will tell him that Lola’s hurting and he should talk to his son if he wants to know more. Then Jack will leave Kyle a message to get in touch with him.

At the Grand Phoenix, Kyle will tell Summer he and Lola are divorcing. Summer will blame herself, saying she shouldn’t have kissed him when they were in San Franciso. “The truth is, I’ve never gotten over you,” Kyle will tell her.

Later, in his suite, Summer will show up at his door, to bring him some necessities. When she tries to leave, Kyle will stop her and move in for a kiss. They will then undress and move over to the bed to make love.

Mariah Copeland (Camryn Grimes) will spot Lola sitting by herself at Crimson Lights. Lola will tell her she and Kyle are over. Mariah offers to go upstairs to her apartment with her and she accepts. They’ll talk about what led to Kola’s downfall – Mariah will blame Summer but Lola will say she thinks Kyle loves her. “I refuse to love someone who is not going to love me back one hundred per cent.”

Meanwhile, Amanda deals with her stalker ex-boyfriend, who says he’s standing there in her hotel room because he wants to talk. And it looks like Abby needs to retrain her staff because a housekeeper let him in. Amanda will ask him to leave saying: “I’ve been done with this and with you for a really long time.”

When there’s a knock on the door, Amanda quickly opens it and Billy Abbott (Jason Thompson) is standing there. She quickly tells Ripley to get out. After he leaves, she tells Billy it was her ex and he comforts her.