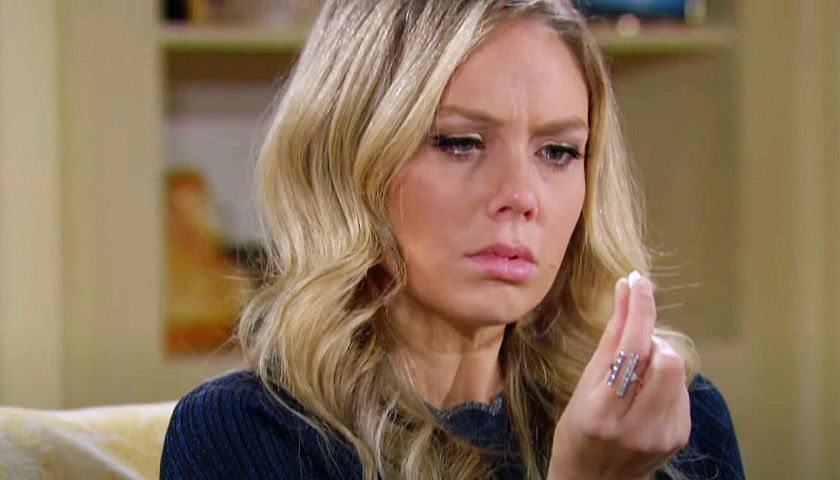 The Young And The Restless (Y&R) scoop for the week of November 8 suggests Abby Chancellor (Melissa Ordway) will begin to rely on her anti-anxiety medication.

Also coming up this week, Nick Newman (Joshua Morrow) will finally find out about Chance and will offer his assistance. Plus, Jack Abbott (Peter Bergman) will stay away from Phyllis Summers (Michelle Stafford) and Amanda Sinclair (Mishael Morgan) will testify against her grandfather. And the Newman Media and Chance Comm war will heat up – but who will come out on top?

Y&R spoilers tease Victor Newman (Eric Braeden) has a plot brewing to take down Billy Abbott (Jason Thompson). And of course, he’ll fall for it hook, line and sinker. On Monday, Billy will think he has an ace in the hole and he’ll confront a smirking Adam Newman (Mark Grossman). But rumor has it, Billy and Lily Winters (Christel Khalil) will suddenly be besieged and they won’t see it coming. Could this be the end of Chance Comm?

Meanwhile, knowing that she and Nick broke up, Jack will steer clear of Phyllis. Which is surprising, considering she’s single and he’s in love with her. Perhaps he just doesn’t want to be her rebound guy. And Sharon Rosales (Sharon Case) will continue to act as a shoulder for Phyllis’ ex Nick to lean on.

Other Y&R spoilers tease Amanda will testify against Sutton Ames (Jack Landron) and it may not go over as well as she expected. She’ll be worried when she talks to Michael Baldwin (Christian LeBlanc) about it afterwards. Amanda will wonder if her grandfather is going to be convicted.

Finally, it looks like Abby’s friends will talk her out of going to Spain. Or perhaps she’ll worry that if she does go, Mariah Copeland (Camryn Grimes) will pounce and try to take Dominic away from her. Either way, she’ll stay home to cry and look after Dominic. “I’ve got to get it together for my son,” she says in the Y&R weekly promo. “He’s depending on me.”

Young And The Restless Scoop – Will Nick Newman Head To Spain?

However, she’s not going to act like a very dependable mom. Abby will eye the medication that Victor asked Nate Hastings (Sean Dominic) to prescribe. Then she’ll take a pill and pass out on the couch. This is certainly not a healthy way to deal with one’s grief.

Her brother Nick will pay a visit to the estate and ask Devon Hamilton (Bryton James) how she’s coping. “She’s not well,” Devon will say. “The reality of never being able to see her husband again is starting to set in.” But will Nick volunteer to go to Spain in Abby’s place?

It looks like a great week coming up, so make sure you tune in! Keep reading The Soap Scoop for the latest soap opera spoilers and Young And The Restless spoilers and latest news. And make sure you join our free Facebook Group or leave us a reply in our comments section. But if you miss an episode, don’t fret. You can watch The Young And The Restless online at CBS.com.

Reality starts to set in this week on all-new episodes of #YR. Watch the latest episodes on @paramountplus. pic.twitter.com/evIe3LlF5x