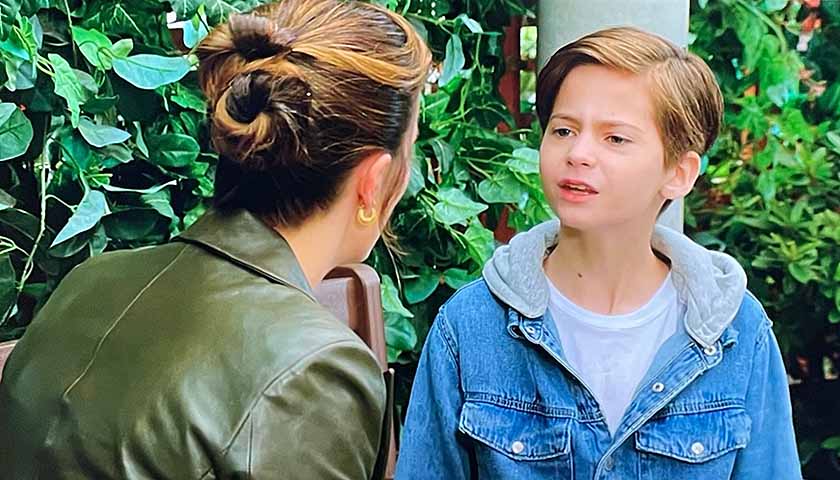 The Young And The Restless (Y&R) scoop for Monday, October 3 suggests Chelsea Newman (Melissa Claire Egan) will tell Connor Newman (Judah Mackey) he has a half-brother.

Y&R spoilers tease Kyle and Summer will recite their vows. Summer will tell Kyle she loves him more every day. Kyle will say no one has ever excited and challenged him more than she has. Then right after Noah Newman (Rory Gibson) pronounces them man and wife, again, guests will be surprised when a helicopter approaches.

The mystery texter will get out of the chopper and walk over to Jack Abbott (Peter Bergman). “Tucker McCall, what are you doing here?” Jack will ask. Tucker will smile and approach the other guests. “Diane Jenkins, I read about your return from the dead,” he’ll say. Jack will tell him to get off his property. But Tucker will instead walk up to Kyle and hand him the key to a vintage Bentley. Nikki’s eyes will widen. Then he’ll pull Jack aside and tell him he really wants to make amends with Ashley Abbott (Eileen Davidson).

After Tucker leaves, Diane will be anxious and will ask Jack what they were talking about. He’ll mention Ashley but say he’s sure Tucker is up to something. Inside, Phyllis will approach Nikki and tell her she’s dying to hear Nikki’s proof about Diane. “Deacon turned out to be very helpful,” Nikki will tell her. “Despite her claims of living a modest lifestyle in LA, Diane was driven around town in a Bentley.” Phyllis will gasp and Nikki will say when Tucker gave Kyle the keys to a Bentley, she almost fell over.

Meanwhile, Chelsea and Connor will wait for Adam Newman (Mark Grossman) at Chancellor Park. But she’ll get a text and tell Connor his dad is stuck in a meeting. Then she’ll say she has to tell him something that could change his life, hopefully for the better. “Before your father and I were together, I was pregnant,” she’ll tell him. “The little boy I’m talking about is your cousin Johnny.” Connor will be stunned. “You were pregnant with Johnny and you just handed him over to Billy and Victoria?” he’ll ask.

Chelsea will tell him it was the best thing for everyone. “It makes you and Johnny half brothers,” she’ll say. “I hope this makes us all closer now.” But Connor will be hurt. “You want to be his mother all of a sudden? Why? Did I do something wrong?” Chelsea will tell him of course not. But now he can get to know Johnny Abbott (Paxton Mishkind) better, as brothers. “Why are you making this sound like it’s about me, it’s about you!” Connor will angrily reply. “You didn’t need to be with Johnny before, why do you need to be with him now?”

Finally, a teary-eyed Chelsea will head to Crimson Lights and call Billy, asking if he can meet her there. He’ll tell her he can sneak out of the renewal ceremony for a bit. A teary eyed Chelsea will moan to Billy about Connor’s reaction. “I think I’ve wrecked my relationship with both boys now.” Then Billy will take her up to the roof of the Grand Phoenix. He’ll tell her she needs to get rid of her tension and anxiety. “Scream it out, you’d be surprised by how freeing it feels.” And they’ll take turns screaming at the sky.