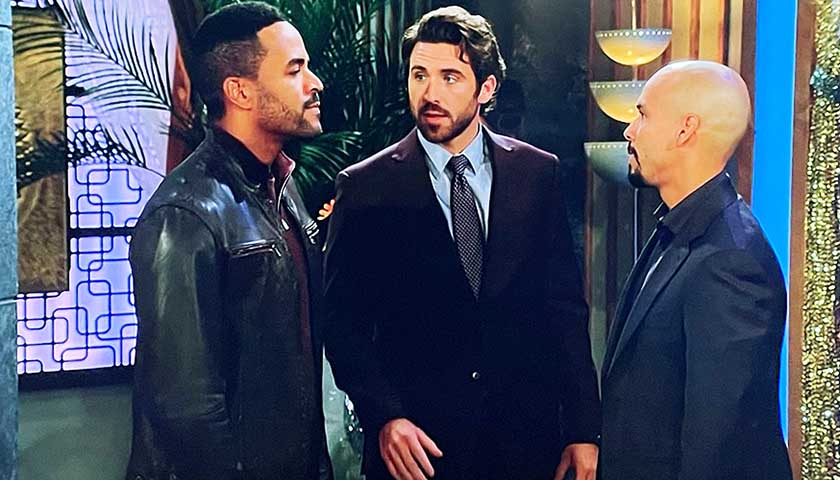 Y&R spoilers tease Tucker will meet with Audra Charles (Zuleyka Silver) to discuss their next move. She’ll tell him if Chancellor Winters decides to cancel the IPO, they may need to try a hostile takeover. Tucker doesn’t want to call it that. “I believe in family and some things are sacred,” he’ll say. “And there are only two people who should be running a Katherine Chancellor company. Me and her grandson.”

Speaking of Chancellor Winters, Devon will arrive and tell Lily he confronted Nate. “He has the nerve to say I drove him to betray us because I haven’t gotten over Neil’s death,” he’ll say. Lily will be stunned. But then she’ll tell Devon that Jill Abbott (Jess Walton) still wants to take the company public. Devon will say there’s nothing she can say to convince him to go public. Talk will return to Nate and Devon will tell her he’s never going to forgive him. “I’m done with him.” When Lily asks what he’s going to do next, he’ll call Tucker and ask if he can meet him at the Glam Club.

Lily will head to Crimson Lights and Audra will walk in. She’ll ask Lily how she’s feeling about everything that went down. “I feel like I can’t even talk to Devon about it because I feel so guilty,” she’ll reply. “I proposed the merger, I encouraged Nate to take the job and I convinced Devon that we should go public.” Then she’ll ask Audra for her advice. “Trust no one,” she’ll tell her.

Meanwhile, Chance will show up at Society, all dressed up and holding flowers for Abby. He’ll ask her to go to the Glam Club with him and they’ll head out for a date night. Once they arrive, they’ll enjoy themselves, until Tucker shows up. Abby will freak and Chance will ask her to calm down. Devon will join Tucker and won’t be happy when he spots Nate sitting by himself.

Then Nate will walk by Devon and Tucker. “Don’t leave on my account,” Devon will tell him. “What I said about you and Neil, that was the truth,” Nate will reply. “I hope one day you finally accept it.” Devon will tell his cousin to keep his father’s name out of his mouth. Abby will see them arguing and tell Chance she should go over there, they’ve come to blows before. Once he hears this, he’ll walk over and stand between them. “Gentleman, that’s enough,” Chance will say. “I don’t know what’s going on but this is not the place.” Then a furious Nate will leave.

Finally, Abby will try to listen in as Devon converses with Tucker. They’ll talk about Nate but then Devon will change the subject. “I know you’re a busy man, but I have Dominic this weekend,” he’ll tell his father. “I was wondering if you’d like to find some time and come and meet him.” Tucker will say he’d love to. But how is Abby going to react when she finds out?