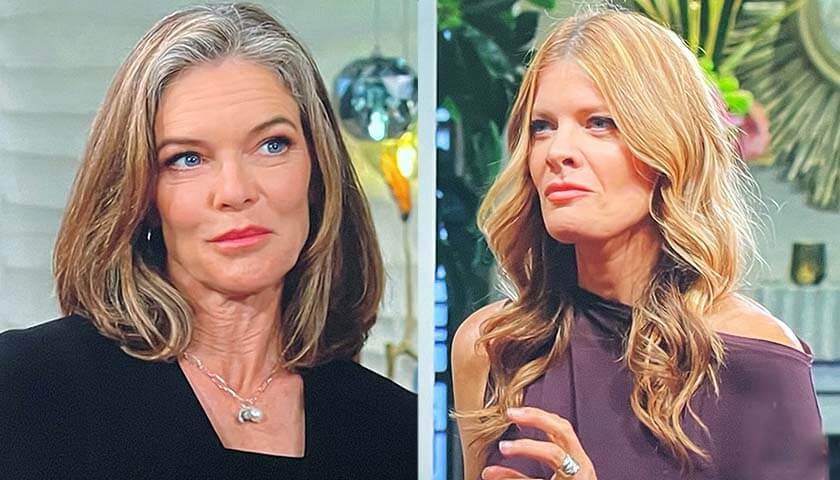 Also coming up, Tessa Porter (Cait Fairbanks) will worry because her dress hasn’t arrived yet and Mariah Copeland (Camryn Grimes) will open gifts from her mother and sister. Plus, Noah Newman (Rory Gibson) will have an awkward first meeting with Allie Nguyen (Kelsey Wang).

Y&R spoilers tease Tessa will fret that her dress hasn’t arrived yet. She’ll wonder if she’s going to have to get married in her bath robe. Crystal Porter (Morgan Obenreder) will distract her by talking about how happy and beautiful Tessa looks and that she hopes she’ll find the perfect person someday. Finally, there’ll be a knock on the door. It’ll be Chloe Mitchell (Elizabeth Hendrickson) and Kevin Fisher (Greg Rikaart) with her wedding dress.

Meanwhile, Mariah will spend the morning with Sharon Rosales (Sharon Case) and Faith Newman (Reylynn Caster). Sharon will tell Mariah that not long after she found out she was her daughter, she gave her a garnet necklace. “This bracelet is the companion piece,” Sharon will say. “It belonged to Cassie.” She’ll tell her it’s hers to take with her as she walks into the next phase of her life. Mariah will be touched by the gift. 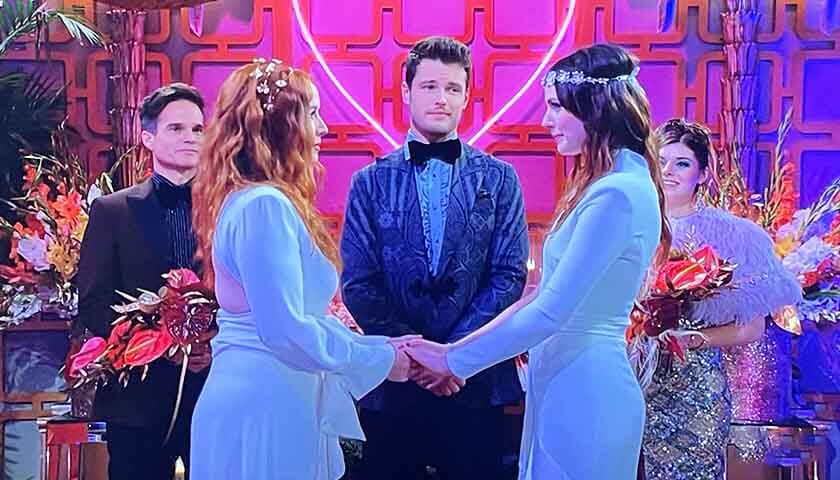 At Crimson Lights, Abby Newman (Melissa Ordway) will introduce Allie to Noah. He’ll make some terrible jokes and Allie won’t even crack a smile. So, Noah will say he gets his sense of humor from his father. Chance Chancellor (Conner Floyd) will walk in and tell Abby they should get ready for the wedding. Allie is returning to the house and Noah will offer to drive her. But she’ll say she’s going to walk. “Ouch!” Noah will reply.

Over at The Grand Phoenix, Phyllis will spot Diane getting off the elevator. She’ll ask her what she’s still doing there. Diane will say she’s still hoping to make amends with Kyle Abbott (Michael Mealor). Phyllis will say if she’s waiting for Kyle to forgive her, she’ll be waiting a long time. “I’ve changed, and Jack is beginning to see that too,” Diane will reply. “I do believe I’m winning him over to my side.” Phyllis will be furious. “You stay the hell away from Jack,” she’ll warn her.

Young And The Restless Scoop – Jack Asks Phyllis To Accompany Him

Diane will laugh and say obviously the mention of Jack Abbott (Peter Bergman) set her off. She’ll admit she wondered about the state of Phyllis and Jack’s relationship. But Diane will say she realized they weren’t a couple. “After all the hurt and betrayal and trauma, I just can’t believe there’s anything romantic left between the two of you.” Then Jack will walk in. When Diane leaves, he’ll ask Phyllis if she would accompany him to Teriah’s wedding and of course she’ll say yes.

Finally, the wedding guests will assemble at the Top Of The Tower and Kyle will take his place as officiant. Sharon will walk Tessa towards her future wife and Nick Newman (Joshua Morrow) will walk Mariah. Then they’ll make their way up towards Kyle together and the ceremony will begin.