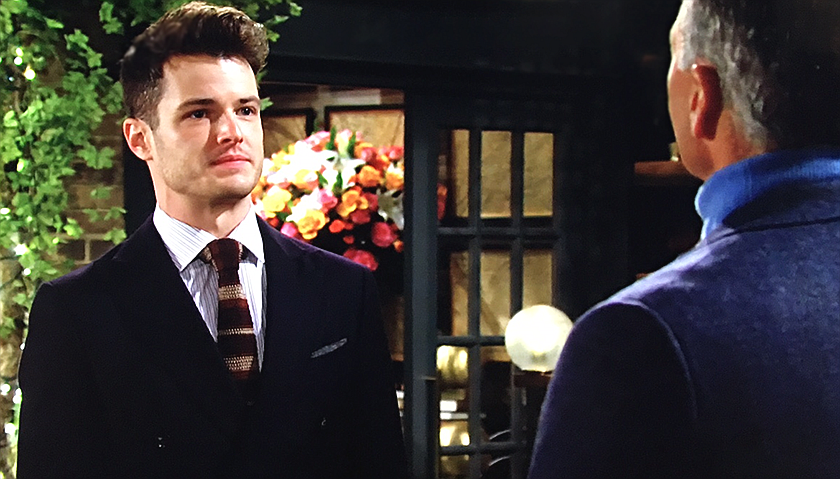 Viewers know Kyle has been agonizing over how to protect Jabot and the ones he loves from the Lockeness Monster. And he’ll tell Summer Newman (Hunter King) that he’s come up with the perfect solution. He’ll confess his affair with Tara Locke (Elizabeth Leiner) to the businessman.

On Wednesday’s Y&R, Jack will spot Ashland at Society and will approach him. He’ll inquire as to why he turned down the business deal with Jabot. “Was it something we said?” he’ll ask.

“Actually, it’s something that you did, or rather something your son Kyle did,” Ashland will respond. When he presses the business tycoon about what he means, Ashland won’t elaborate. Then Jack will ask if he’s the one spreading the dark rumors about Jabot. Ashland will deny it. But Jack will tell him he finds the timing “especially intriguing.”

Meanwhile, at the Grand Phoenix, Kyle will run into Tara. He doesn’t want to talk in the lobby and suggests they meet in his room. She’ll ask what happened when he met with Ashland. “He accused me of sleeping with you.”

Summer will open the door and ask what’s going on. Tara will say she’s in Genoa City to talk to her husband – she may be the only one who can convince him nothing happened.  As she leaves, she’ll advise Kyle to steer clear of her husband.

Summer Newman (Hunter King) will tell him to do the same thing. But pig-headed Kyle won’t listen to either of them. “I need to do something,” Kyle will tell his fiancé. “I’m willing to take the heat. This is my battle.” Kyle will say he’ll offer to walk away from Jabot if Ashland is willing to leave the company and everyone else alone. Summer thinks it’s a bad idea.

Then he’ll walk up to Ashland at Society. Jack will be stunned to see his son and Ashland will say hello. But Kyle will tell him to save the small talk. “It’s time you and I had a real conversation.” Will Kyle confess his affair with Tara?

Today's all-new episode of #YR was preempted due to CBS News coverage. It will air tomorrow at our regularly scheduled time.