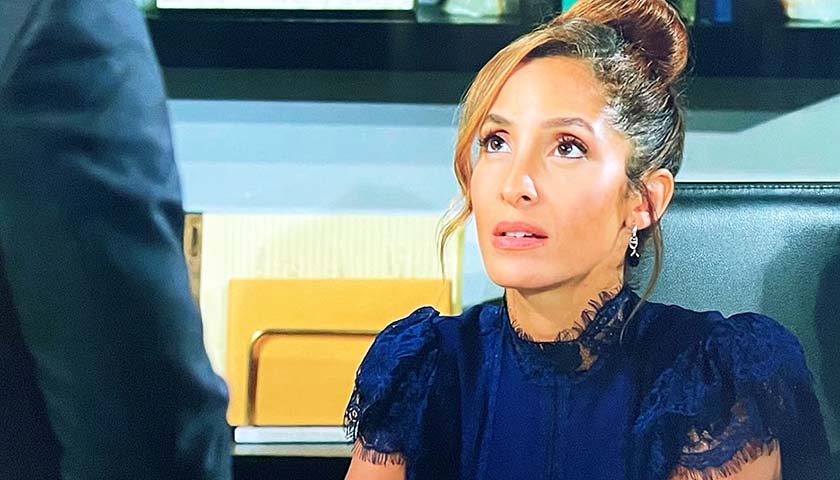 Y&R spoilers tease preparations will begin for Kyle and Summer’s renewal ceremony at the Abbott estate. Jack Abbott (Peter Bergman) will tell his son he’s so proud of the man he’s become. Upstairs, Summer will tell Phyllis she hopes there won’t be any distractions. But Phyllis will promise her nothing will happen to ruin her day.

At the Genoa City Athletic Club, Diane will get ready. The mysterious texter will come to her door. She’ll say everything’s working out for her and his timing couldn’t be worse. “If the Abbott’s get one whiff of suspicion about our connection,” she’ll tell him. “It’s over for me.” He’ll say they made a deal but she’ll tell him she needs more time. Then he’ll tell her that with everyone gathered at the estate, it’ll be the perfect time for him to reveal himself. But he’ll promise not to blow her cover.

Back at the Abbott estate, Phyllis will watch as Jack chats with Diane outside. She’ll go back in and spot Nikki. Phyllis will tell her she better have found out something good, because Diane is ingratiating herself into the family. “I have proof that she lied about her time there,” Nikki will tell Phyllis. “A reckoning is coming.” Then the ceremony will begin, with three officiants, Noah Newman (Rory Gibson), Mariah Copeland (Camryn Grimes) and Tessa Porter (Cait Fairbanks).

At Crimson Lights, Devon will run into Elena Dawson (Brytni Sarpi). He’ll say he’s glad things worked out with Nate Hastings (Sean Dominic) and that he’s back at Chancellor Winters. Elena will make a face and he’ll ask if everything is all right. “Actually, no,” she’ll reply. Elena will tell Devon that it’s like Nate is a completely different person. “You have always been generous and forgiving of him,” she’ll say. “I hope that continues.” Then she’ll drop her hotel room key and Devon will be surprised to realize she’s moved out of the penthouse.

Young and The Restless Scoop – Elena Has Been A Positive Influence

Meanwhile, Nate will join Audra Charles (Zuleyka Silver) at Society. She’ll Nate if there’s anything to do in Genoa City. He’ll tell her about Noah’s new club. “Maybe we can go there one night,” she’ll say. “I’m not so sure that’s such a good idea,” he’ll reply. She’ll say it would be taking team building to a whole new level. Then he’ll say he’s in a relationship. Devon will walk in and see them together. And he’ll be suspicious.

Finally, Devon will tell Lily Winters (Christel Khalil) he’s noticed Audra and Nate have been spending a lot of time together outside the office. Plus, he’ll say he just found out Elena is staying in a hotel. He’ll say Elena has been a positive influence and the voice of reason to Nate. “There’s a lot riding on this IPO and Nate needs to be in a great head space,” Devon will add. But Lily won’t look happy, and she’ll tell Devon he needs to have more faith in Nate.