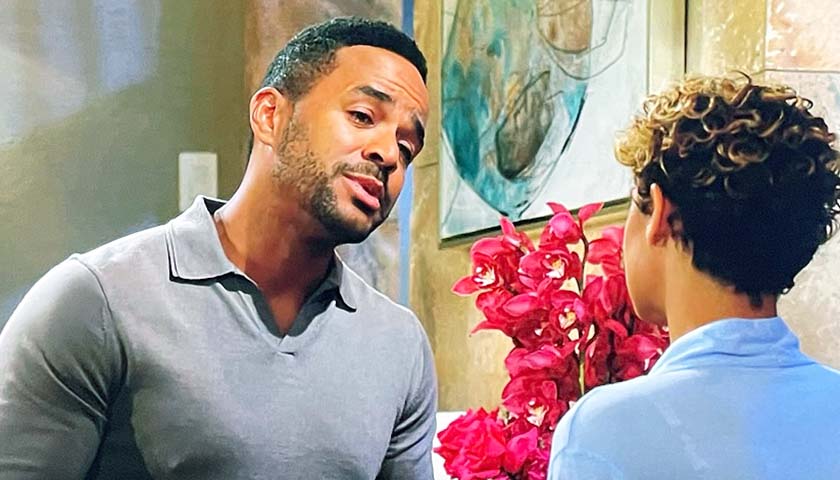 The Young And The Restless (Y&R) scoop for Friday, September 23 suggests Nate Hastings (Sean Dominic) will tell Elena Dawson (Brytni Sarpi) she has more in common with Devon Hamilton (Bryton James) than he thought.

Also coming up, Phyllis Summers (Michelle Stafford) won’t be able to hide her hurt feelings at the surprise party for Summer Newman (Allison Lanier) and Kyle Abbott (Michael Mealor). Plus, Victor Newman (Eric Braden) will be on board with the plan. And Victoria Newman (Amelia Heinle) will agree to Chelsea Newman’s (Melissa Claire Egan) request.

Y&R spoilers tease Phyllis will be stunned that the mother of the bride wasn’t invited. When Nick Newman (Joshua Morrow) shows up, she’ll ask Summer if that’s why she ran out of the coffee house. “You just needed to ditch me?” Noah Newman (Rory Gibson) will say they didn’t plan on excluding her and he’ll take responsibility for it. But Phyllis will walk around with a sour face, until Summer and Kyle tell her and Diane Jenkins (Susan Walters) they’ll give them one more chance at Marchetti.

Victoria will head to Society and see Chelsea and Billy Abbott (Jason Thomson) there. She’ll say she heard about the pool outing. “I don’t really appreciate you organizing this little outing behind my back,” she’ll tell them. Billy will say there was nothing subversive about it. Then Victoria will reiterate it’s not good timing to tell Johnny. Chelsea will bring up DNA testing and say one day Johnny will discover his half brother and biological mother were in town. Billy will say maybe it’s time they told Johnny. Victoria will agree but she’ll lay down some ground rules and Chelsea will agree to them.

At Chancellor Winters, Devon will tell Lily Winters (Christel Khalil) he wishes he could be excited about going public but he still has his concerns. Lily will say they can structure it so that they have 51 per cent of the shares. “Because I trust you so much,” Devon will reply. “If you really think this is the best course of action then yeah, I’m on board.”

Young And The Restless Scoop – Nate Learns Some Vital Information

Meanwhile, Nate will tell Elena he made amends with his family and he’s going to stay at Chancellor Winters. “But you did that with an agenda in mind, didn’t you?” Elena will reply. Nate will say he’s going to use the whole thing to unify his family. Elena will say she wants to believe in him. But later, Elena will admit she’s worried and say she can’t get behind his espionage plan. “You are as limited in your view of what I can accomplish as Devon is,” Nate will tell her. “I guess the two of you have more in common than I thought.” Then he’ll storm off.

Finally, Nate will end up at Crimson Lights and a stranger will recognize him. Audra Charles (Zuleyka Silver) will tell him he should recognize her name. “Considering I’m meeting with your team at Chancellor Winters tomorrow,” she’ll continue. “Jill brought me in to take your company public.” Nate will ask if he can join her. He’ll say he’d be happy to answer any questions she has.

Young And The Restless Scoop Thursday, September 22: Diane And Phyllis Lose Their Jobs After Another Blowout – Noah Hosts A Party For Summer And Kyle #YoungandRestless #YoungandtheRestless #YR https://t.co/Y8UOWhQcRG