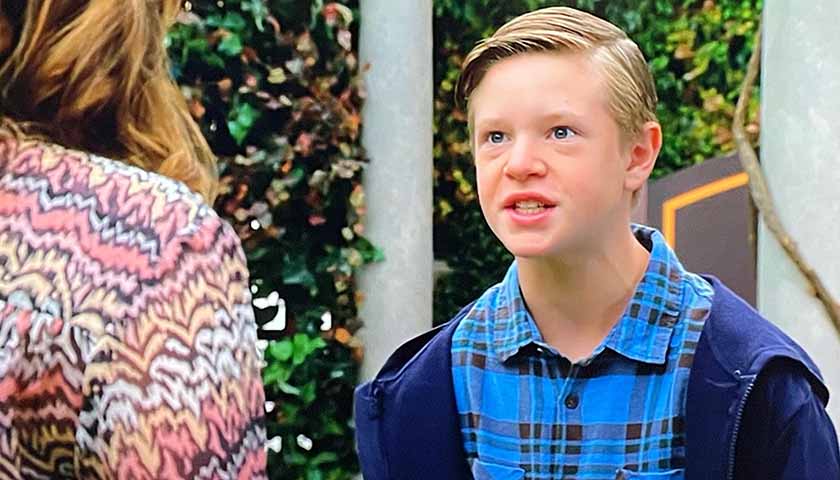 Y&R spoilers tease Abby will tell Chance she’s worried about Tucker. “Under no circumstance is Tucker McCall allowed anywhere near our son.” She’ll tell him he’d better stand by her on this. But Chance will say he thinks Abby is taking it too far. They should be focusing on the future, not the past. Then they’ll bicker and Chance will leave.

At his new club, Noah Newman (Rory Gibson) will be concerned about his opening night profit margins. But Allie Nguyen (Kelsey Wang) will lift his spirits by saying the place is amazing and so is he. Then Nikki will show up and tell Noah she has questions for him about his time in London. “Have you ever heard of a company called Private Image Limited?” she’ll ask and say the fund is called Wild Beauty. Noah will admit he knew someone who worked there, the woman he was seeing in London. “Last night she showed up out of nowhere. This all just seems kinda weird to me.”

At Crimson Lights, Chelsea will eavesdrop on a conversation between Billy Abbott (Jason Thompson) and his son. Johnny will tell his dad he wants life to go back to normal. He doesn’t want to keep thinking about his birth mom every day. Billy will assure him that’s fine and nothing is going to change. “Great, so it’s my choice and I decide to never talk about it again,” Johnny will say. Then he’ll tell Billy he’s meeting up with some friends at Chancellor Park and Chelsea will also slip out the patio doors.

Adam will walk in and Sharon will tell him she had a disturbing conversation with Chelsea. “In what way?” Adam will ask. Sharon will say she told her she should get back into therapy but it didn’t go over well at all. “She just rejects anything she doesn’t agree with,” Adam will comment. And he’ll say now she has a new fixation on Johnny.

Young And The Restless Scoop – Johnny’s World Flipped Upside Down

Speaking of fixations, Chelsea will approach Johnny while he’s sitting on a bench at the park. She’ll sit beside him, but he’ll grab his backpack and move away. Chelsea will thank him for hanging out with Connor at the pool. “He really enjoys spending time with his older…cousin.” Johnny will glare at her. “You can stop, okay,” he’ll reply angrily. “I know the truth about you and it’s not going to change anything because you are not my mom.”

Chelsea will say that since they’re already in each other’s lives, she didn’t want him to find out from somebody else. “But it was your idea in the first place,” Johnny will surmise. “You are why it feels like my world was just flipped upside down.” He’ll ask if Connor Newman (Judah Mackey) knows and by the look on Chelsea’s face, he’ll figure out it didn’t go over well. “Having this conversation was a bad idea all around,” Johnny will tell her before he takes off. “Neither Connor nor I want anything to change.”