The Young And The Restless (Y&R) scoop for Friday, August 19 suggests Chance Chancellor (Conner Floyd) will decide to present Ashland Locke’s (Robert Newman) death to the DA as an accident.

Also coming up, Diane Jenkins (Susan Walters) will have a vivid daydream. Plus, Billy Abbott (Jason Thompson) will open up to Chelsea Newman (Melissa Claire Egan).

Y&R spoilers tease the hype about this week’s promo was much ado about nothing. As many viewers suspected, the big kiss between Diane and Jack Abbott (Peter Bergman) was all in Diane’s head. In fact, even in her daydream she’ll tell Jack that no matter how deep her feelings are for him, she knows he’ll never feel the same way. And when she imagines him kissing her, Diane will hear him say her name. “You seemed to drift off,” Jack will say. “Where did you go?”

Meanwhile, Chelsea will ask Billy if part of him misses who he used to be. He’ll say his trouble-making side is still imbedded in him. He’ll tell her Lily Winters (Christel Khalil) feels like he’s spending too much time on his podcasts. But Chelsea will tell him she’s wrong and thinks he’s happier sitting in front of a microphone than in the C suite. Then she’ll ask him how Victoria Newman (Amelia Heinle) felt about her request. He’ll say she feels like it’s a bad time. But he’ll also promise to talk to his ex on Chelsea’s behalf. 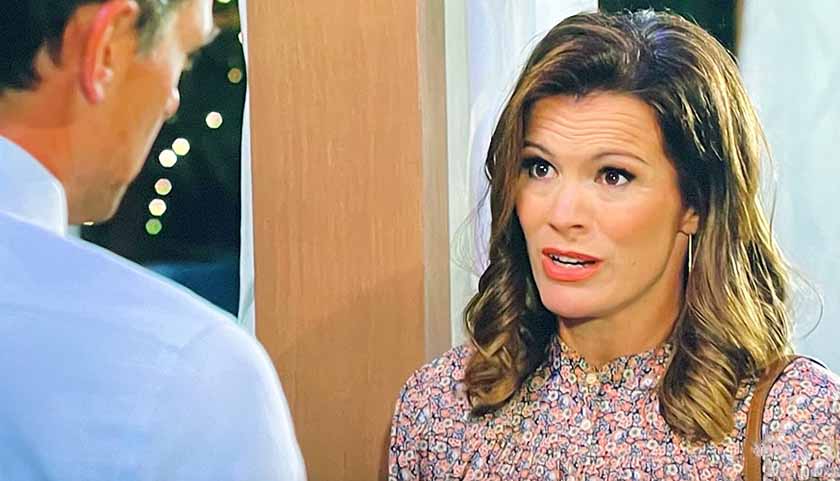 At Crimson Lights, Chance will call Kevin Fisher (Greg Rikaart) and tell him he’s made up his mind. “I finally know what I need to do,” he’ll say, as Nick Newman (Joshua Morrow) walks in. He’ll tell Nick some new evidence came to light. Nick will suggest they go to the ranch, as Victoria, Victor Newman (Eric Braeden) and Nikki Newman (Melody Thomas Scott) are there.

When they arrive at the ranch, Chance will tell the Newmans it’s not a conversation. He just needs them to listen to what he has to say. Then he’ll run over his evidence, including the latest, the bloody fingerprint. “Have you forgotten that you’re a member of this family?” Victor will ask him. Chance will lay out the two scenarios that could have happened. The first is that Ashland was injured and managed to get to his car and crashed it. The second is that Victor’s security guards moved his body and set up the car accident.

Young And The Restless Scoop – The Newman Family Are Relieved

“So Chance, tell us, which scenario will you pursue?” Victor will ask. Chance will say no matter which scenario is true, Ashland’s death was an accident. “A despicable human being is dead, but it’s not necessarily a crime.” Then Chance will tell them he’s going to present the first scenario to the district attorney.

“I don’t see any reason for anyone to stand trial for the death of a man who was not murdered,” he’ll conclude and the Newmans will let out deep sighs of relief. But no one will be more pleased than Victor. “Chance you did the right thing, and Abby would be very proud of you,” Victor will say. But later, Chance will sit at Society’s bar alone and will not look proud of himself at all.

One Thought to “Young And The Restless Scoop Friday, August 19: Chance Lets Victor Off The Hook – Jack And Diane’s Kiss Was A Daydream – Chelsea And Billy Hang Out”