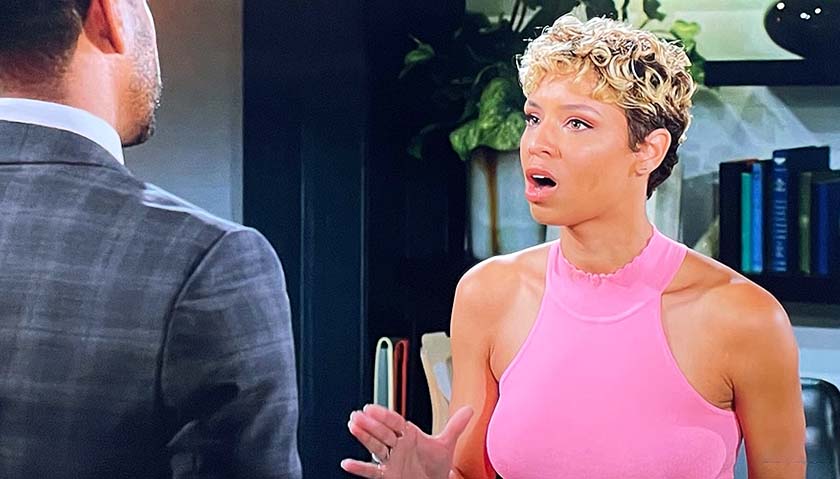 The Young And The Restless (Y&R) scoop for Friday, August 12 suggests Elena Dawson (Brytni Sarpi) has had it with Nate Hastings’ (Sean Dominic) attitude.

Y&R spoilers tease Summer and Kyle will discuss hiring Tessa as the new face of Marchetti. They’ll arrive at Crimson Lights and find Tessa and Mariah Copeland (Camryn Grimes) there and offer Tessa a job as the new face of Marchetti. “I’m really flattered, but it’s another reminder of what I might be losing,” Tessa will reply, via her phone. However, she’ll think about it. After they leave, Mariah will talk about what an exciting opportunity it is. “Stop pretending,” Tessa will say. “This was all you.”

Meanwhile, Chelsea will pressure Billy about setting up a play date for their boys. “Billy, you are never going to change your stance towards me when it comes to Johnny, are you?” a tearful Chelsea will say. He’s her biological son and she never gets to see him. But Billy will remind her it was her choice. “Johnny already knows that Victoria is not his biological mother,” she’ll reply. “Would it really be so terrible if he learned that I am?” Billy will say they had an agreement, but he’ll agree to talk to Victoria about it

At Society, Nate will spot Sally. He’ll ask her if she’d be willing to reschedule the meeting they had planned. But Sally will be confused. “You said reschedule but I don’t recall a meeting,” she’ll say. Sally will check her phone and  tell him she didn’t have any appointments for that day. “I guess there was a conflict with the scheduling,” Nate will reply.

Then he’ll get to the heart of the matter. Elena would like to be released from her contract with Newman Media. “You’re trying to lure away talent I have signed under contract,” Sally will tell him and she’ll accuse him of poaching. But Nate will write down a figure as a financial incentive to release her. Sally’s eyes will widen and she’ll agree to it.

When they get back to the office, Nate will wonder why Elena isn’t more excited. “The reason Sally can’t remember canceling the meeting is because she was not invited in the first place,” she’ll say. “That dinner between the three of you was supposed to be an intimate dinner between you and Imani. She set it all up.” But Nate will disagree and tell his girlfriend she has it in for Imani Benedict (Leigh Ann Rose) and it’s clouding her judgement.

However, Elena will tell him she has a clear picture of the situation. “The way she’s always fawning over you, that’s got to be a real ego boost.” He’ll say Imani thinks Devon Hamilton (Bryton James) is holding him back and he agrees. He also thinks Elena is blowing the whole thing out of proportion. “No I am not, you are refusing to see what’s in front of your face,” Elena will reply. She’ll say Imani tells him everything he wants to hear. “A beautiful woman stroking your ego,” she’ll continue. “And what could be more enticing than that?”