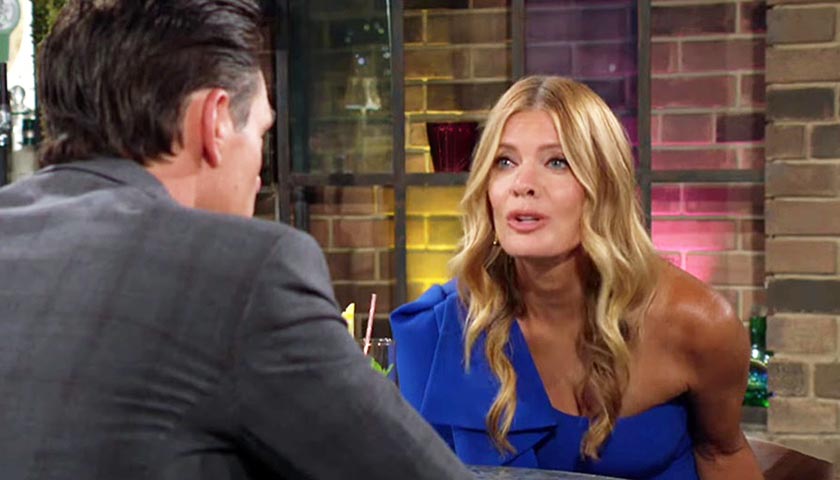 The Young And The Restless (Y&R) scoop for the week of August 8 suggests Billy Abbott (Jason Thompson) will have a warning for Phyllis Summers (Michelle Stafford).

Also coming up this week, Chance Chancellor (Conner Floyd) will seek the truth and Abby Chancellor (Melissa Ordway) will find herself in a bind. Plus, Nikki Newman (Melody Thomas Scott) will put the pressure on. And Elena Dawson (Brytni Sarpi) will spill the tea to Devon Hamilton (Bryton James).

Y&R spoilers tease Elena will still be stunned that Imani Benedict (Leigh Ann Rose) encouraged the rift between Devon and Nate Hastings (Sean Dominic). And she’ll warn Devon about Amanda Sinclair’s (Mishael Morgan) meddling sister. But how will he react?

Y&R Weekly Scoop – Chance Is Convinced It Was Moved

Meanwhile, Chance will try to pry the truth out of Victor Newman (Eric Braeden). He’s convinced The Mustache had his henchmen move Ashland Locke’s (Robert Newman) body, to take the heat off his children. However, will Victor admit to anything?

Young And The Restless Scoop Monday, August 8: Diane Freaks When She Learns Phyllis Got A Job At Marchetti – Chance Asks Victor To Be Straight With Him #YR #YoungandRestless #YoungandtheRestless https://t.co/uPhjfjf8KR

Speaking of Victor, his wife will push Abby to get her husband to back off. Nikki Newman (Melody Thomas Scott) will pay Abby a friendly visit. But things will get a little tense when Nikki reminds her stepdaughter that her loyalty should be to the Newman family. She’ll suggest Abby talk to Chance and ask him to close the Ashland Locke case.

Young And The Restless Scoop –  Still Committed To The Take Down

Finally, Phyllis will be ready for battle, after Summer Newman (Allison Lanier) and Kyle Abbott (Michael Mealor) offer her a job at Marchetti. Of course, they don’t realize Phyllis has an ulterior motive – to sabotage Diane Jenkins (Susan Walters). But she’ll lie to her daughter and promise to play nice with Diane.

However, she’ll confide to Nikki that she’s still completely committed to their plan to take Diane down. And she may even discuss her plot with Billy Abbott (Jason Thompson), because he’ll give her a warning. “Brace yourself, there is always collateral damage in war,” Billy tells Phyllis in the Y&R weekly preview. Which is good advice, considering she could end up alienating her daughter. But Phyllis will be as arrogant as always. “What makes you think I will lose?” she’ll reply.

One Thought to “Young And The Restless Scoop August 8 To 12: Phyllis Prepares For Battle – Billy Warns Of Collateral Damage – Elena Spills The Tea”