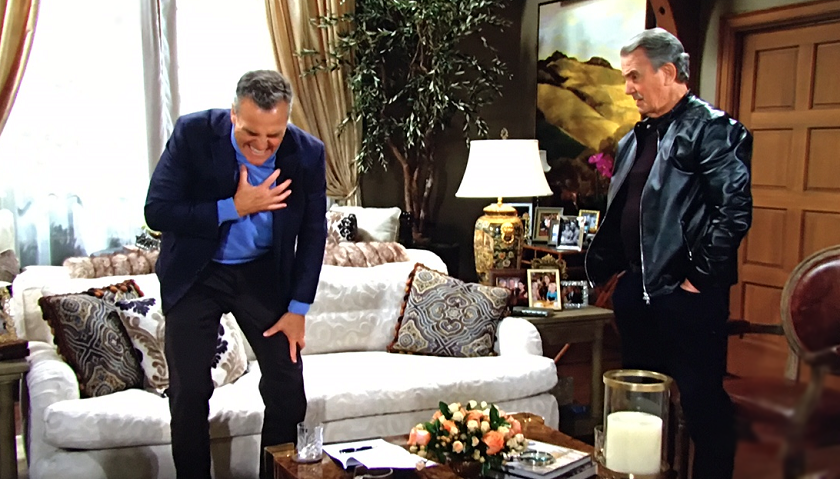 In the Y&R weekly preview, Ashland is seen meeting with Victor, a drink in his hand. He’ll start to get angry as the men argue about Cyaxares Media. Viewers will recall that Ashland reneged on his deal with Victor and is going to sell the company to Victoria Newman (Amelia Heinle) instead.

“The deal is off!” he’ll shout. “Cyaxares is no longer on the market.” Then he’ll grab his chest and fall back onto the couch, obviously in a lot of pain. Victor will stand there and watch as he keels over.

It’s been a rough couple of weeks for the Lockeness Monster. He suspects his wife had an affair with Kyle Abbott (Michael Mealor). In early April, he asked Kyle if he’d ever run into Tara Locke (Elizabeth Leiner) when he was living in New York.

Kyle told him he didn’t recall her. “Do you recall sleeping with her?” he then asked Kyle. Ashland will also confront his wife about the suspected affair. Tara will call Kyle on Friday’s episode and tell him she and her husband had a huge argument. She won’t go into any details but she’ll be very upset.

Y&R spoilers also tease that Ashland will face another confrontation. Jack Abbott (Peter Bergman) will demand to know if he’s been spreading the dark rumors about Jabot. This means his blood pressure will already be on the rise by the time he arrives at the Newman Ranch.

If Ashland were to kick the bucket, it sure would solve all of Kyle’s problems. Y&R spoilers indicate that next week, Kyle will decide to confess his affair to the business tycoon. However, he may not get the chance.

But when Ashland collapses at the ranch, will Victor save his life? It may cause him to feel an obligation to Victor and renege on his deal with Victoria. So, when all is said and done, will Victor come out on top once again?

Victoria turns the tables on Adam today on #YR. pic.twitter.com/6hXF3bsoea

One Thought to “Young And The Restless Scoop: Ashland Locke Has A Heart Attack”