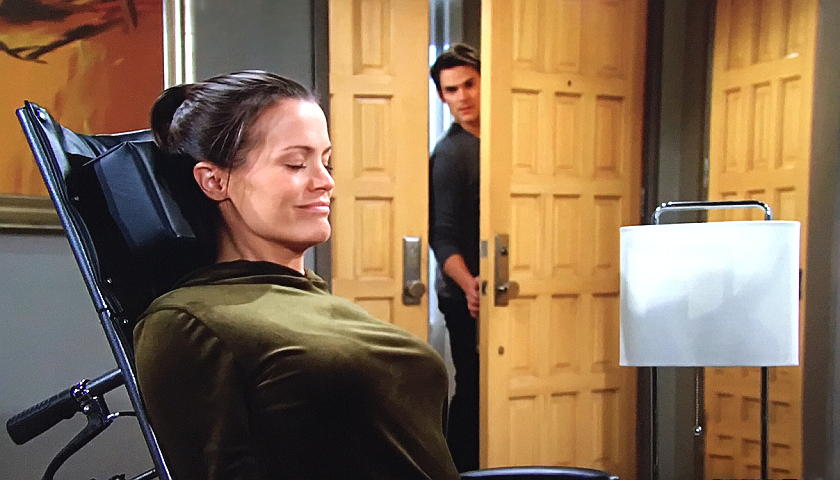 The Young And The Restless (Y&R) scoop suggests Adam Newman (Mark Grossman) will realize Chelsea Newman (Melissa Claire Egan) is up to something.

In the Y&R video preview for next week, Adam will crack open the door to his penthouse and watch as Chelsea smiles to herself while she stretches in her wheelchair.

Viewers know Chelsea was paralyzed after suffering from a stroke. However, she has continued to make progress for weeks but hidden it from her doctor and Adam. This has included giant steps like speaking to Chloe Mitchell (Elizabeth Hendrickson) and standing up on her own. Chloe is the only one who knows how far she’s come. But it was only a matter of time before Adam figured it out.

Something puzzling will also happen to put Adam on high alert before he finds out Chelsea is no longer paralyzed. On Thursday’s Y&R, he’ll be at Crimson Lights and his cell phone will beep. He’ll take a look at it and see a message from Sharon Rosales (Sharon Case).

“Leave me alone, Adam,” the text will say. “Don’t do this. Rey is sick and I have to focus on that. Please let me go for good.” He’ll have a confused look on his face, especially when he sees the two messages above Sharon’s reply.

“I can’t stop thinking about you,” the first message says. “What I wouldn’t do for both of us to be free.” Then a follow-up. “Please don’t ignore me. Please respond.”

Young And The Restless Scoop – Will Adam Newman Go Along With The Ruse?

Adam knows he didn’t send those messages to Sharon, but who did? Obviously, it will lead up to Adam returning home and seeing Chelsea moving around in her wheelchair, so he’ll put two and two together.

The big question is, now that Adam knows Chelsea’s faking it and is up to something, what’s he going to do about it? Will he confront her, or go along with her ruse to figure out what she’s up to?