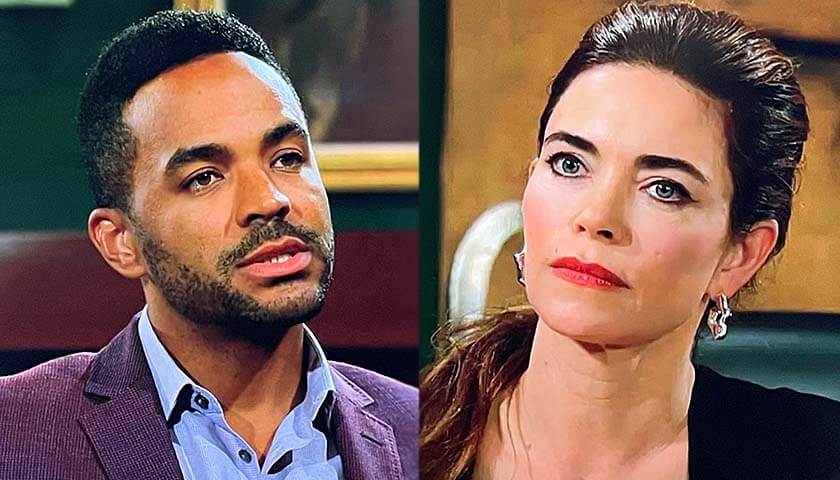 The Young And The Restless (Y&R) scoop suggests Victoria Newman (Amelia Heinle) will have a major proposal to consider. But will she accept Nate Hastings’ (Sean Dominic) deal?

On Friday, Nate blabbed to the Newman Enterprises CEO that Jill Abbott (Jess Walton) wants to take Chancellor Winters public. And although Devon Hamilton (Bryton James) is against it, Lily Winters (Christel Khalil) seems to be in favor of it.

Then Nate made her a stunning offer. He would act as her inside man and feed her information so she could buy up shares and Newman would become the majority shareholder. But there was also one caveat. Nate would help her acquire the company, if she put him in charge of Chancellor Winters after the takeover.

Y&R spoilers tease Victoria will tell Nate she’ll consider his deal. Then she’ll spill the news to Nick Newman (Joshua Morrow). Victoria considers her brother to be a moral compass. Although, his actions of late have certainly proven otherwise!

Nevertheless, she’ll seek out Nick, who may advise her against teaming up with Nate. But will she tell him she wants to go for it anyway? Victoria has proven she’s a ruthless business woman. However, insider trading is a criminal offense. So, she may also have doubts about the plan.

“Well, I have to say I am completely stunned that you would come here to tell me this,” Victoria said to Nate when he confided his scheme to her. “Why would you help Newman gain a controlling share of Chancellor Winters?”

The whole scenario obviously made Victoria wonder if she could trust him. “You would do that to your own family?” she asked. On the other hand, the Newman CEO may accept Nate’s offer, only to throw him to the wolves at the first opportunity.

So, what do you think? Is Victoria going to agree to Nate’s proposal or will she tell him she’s not interested? Vote in our poll below!

Will Victoria Team Up With Nate To Take Over Chancellor Winters?