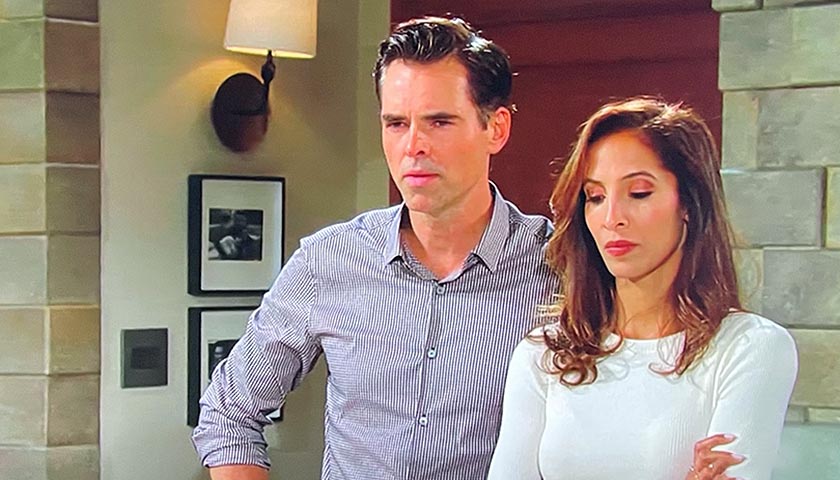 The Young And The Restless (Y&R) scoop suggests tensions will continue to build between Lily Winters (Christel Khalil) and Billy Abbott (Jason Thompson). But will the couple decide to call it quits?

Y&R spoilers tease Billy and Lily will grow apart, as their professional lives implode. Thanks to Billy’s vendetta against Adam Newman (Mark Grossman), Chance Comm is not only being sued, its value as a company is also plummeting.

Of course, the fact that these two are also romantically involved and live together is making their situation that much worse. Lily knew Billy was a loose cannon when she started dating him. Although she was hesitant at first, he also convinced her he’d changed his ways.

But a leopard cannot change its spots and neither can Billy. When it comes to Victor Newman (Eric Braeden), and especially Adam, Billy just can’t help himself. He took a big gamble by blackmailing his rivals. But instead of it paying off, it came back to bite him.

Young And The Restless Scoop Friday, November 19: Lily Blasts Billy For Going Behind Her Back – Phyllis Can't Get Her Mind Off Jack #YR #YoungandRestless #YoungandtheRestless #Lilliam https://t.co/vGwqa9koEL

On several occasions lately, Lily has blasted Billy to high heaven. On Friday, when she found out he’d told Victor he would resign from Chance Comm, she lost it. “I cannot believe that you did this,” she said. “We’re supposed to be partners and you went behind my back.” Lily may get to the point where she’ll regret hooking up with Billy in the first place, if she isn’t already.

Plus, it does seem like writers are looking to shake things up, couple-wise. Phyllis Summers (Michelle Stafford) and Nick Newman (Joshua Morrow) recently parted ways.  Mariah Copeland (Camryn Grimes) and Tessa Porter (Cait Fairbanks) are having some major problems. And there are rumors that Sharon Rosales (Sharon Case) and Rey Rosales’ (Jordi Vilasuso) relationship will also be kaput before long.

But on the other hand, Lily has given Billy the benefit of the doubt on many occasions and may continue to do so. And she does care for him a great deal. Love could win out, however, their business problems could drive them apart for good.

So, what do you think? Will Lily and Billy break up before the end of the year? Vote in our poll below!

Will Lily And Billy Call It Quits?