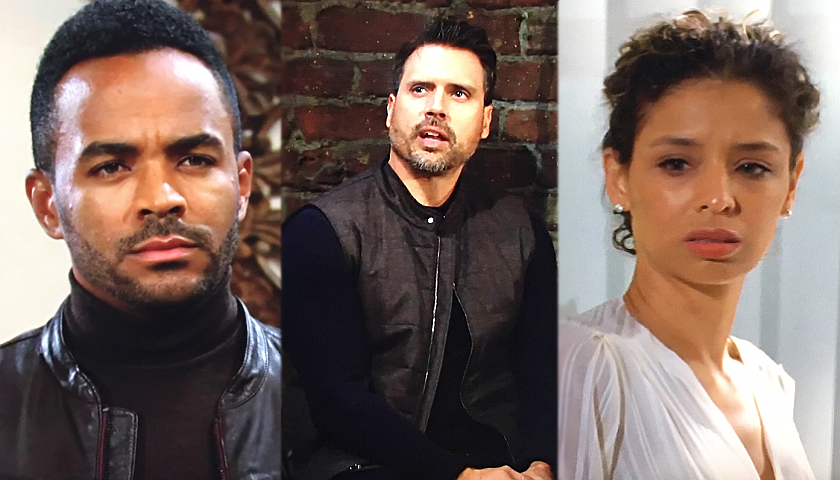 The Young And The Restless (Y&R) scoop suggests Devon Hamilton (Bryton James) will eventually find out about Elena Dawson (Brytni Sarpi) and Nate Hastings’ (Sean Dominic) affair. But who will spill the beans?

Viewers were stunned, but not really all that surprised when Nate and Elena slept together last week. Their shared bond, saving lives, at the clinic seemed to be leading up to it. Plus, Nate was playing everyone involved in the whole Amanda Sinclair (Mishael Morgan) is Hilary’s twin situation.

Elena is feeling incredibly guilty about what they did. It seems like it won’t be long before the jig is up and she wants to confess to Devon. However, she knows it could destroy everything they’ve built over the past year.

Her more than usual weepy behavior hasn’t gone unnoticed either. “There’s something going on with Elena,” Devon will say to Nate in the Y&R weekly promo for next week.  “And I can’t help but wonder if you know what it is.” Will Nate tell Devon the truth?

Of course, then there’s Nick Newman (Joshua Morrow). He showed up at the clinic minutes after Nate and Elena had sex. Nick witnessed Nate putting his shirt on and a very upset Elena rushing out. He’s pretty sure he knows what happened.

On Friday, Nick had some words of wisdom for Nate. “You know, some betrayals are beyond the pale,” he said to Nate. “You lose the right to call yourself family.” Nick is good friends with Devon, so will he be tempted to tell him what he knows?

Young And The Restless Poll – Is Elena Dawson Feeling Guilty Enough To Confess?

Elena has become distraught about it, but is she feeling guilty enough to confess? Nick knows what he saw and may tell his friend. Nate obviously wants Elena for himself so telling Devon would destroy Elevon’s relationship. But it would also ruin his close friendship with his cousin.

So who will end up telling Devon that his girl and his cousin slept together? Vote in our poll below.

One Thought to “Young And The Restless Poll: Who Will Tell Devon About Nate And Elena?”