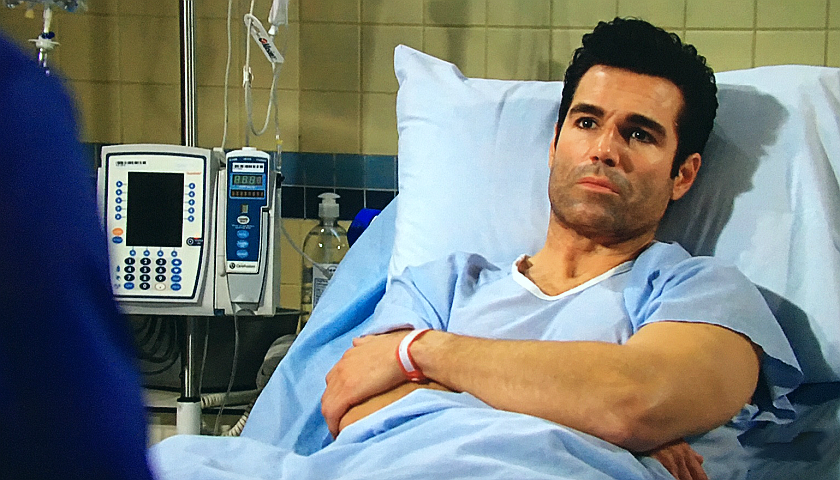 The Young And The Restless (Y&R) scoop suggests Rey Rosales (Jordi Vilasuso) was deliberately poisoned with a deadly substance called thallium. But who did it?

Viewers know Rey was deathly ill. He thought it was a stomach flu at first and insisted he didn’t want to go to the hospital. Sharon Rosales (Sharon Case) watched as her husband deteriorated by the hour. When he collapsed on the floor, she finally called an ambulance.

Elena Dawson (Brytni Sarpi) and Nate Hastings (Sean Dominic) determined he had been poisoned. Nate had the antidote flown in from Chicago and it arrived just in time to save Rey’s life.

When a team of specialists was sent into Sharon’s house to check for traces of thallium, Nate told Rey and Sharon the poison was found in the body wash, hair gel and shaving cream. But it was only in the men’s products. “I was the target,” Rey determined.

Of course, the first suspect to pop into Rey’s mind is Adam Newman (Mark Grossman). “Who would be happy if I were gone?” he asked Sharon. He’s so sure it’s Adam that he’ll call DA Michael Baldwin (Christian LeBlanc) and meet with him about it on Thursday. Later, he’ll show up at Adam’s door.

Then there’s Chelsea Newman (Melissa Claire Egan), who has been plotting to take down Adam ever since she saw the photo of him kissing Sharon. Last week, she gave Chloe Mitchell (Elizabeth Hendrickson) a bag and instructions on what she wanted her to do. Could the bag have contained thallium and is Chelsea setting Adam up to take the fall?

The last suspect on the list is Rey’s new wife Sharon. Viewers know she’s suffered from bipolar issues in the past. She and Rey have had a number of problems since they got married on New Year’s Eve, specifically her feelings about Adam. Sharon sat vigil by her husband’s bedside until he recovered. But could Sharon have added the poison to Rey’s every day items and not even remember doing it?

So, what do you think? Who is responsible for putting Rey in the hospital and nearly killing him? Vote in our poll below!