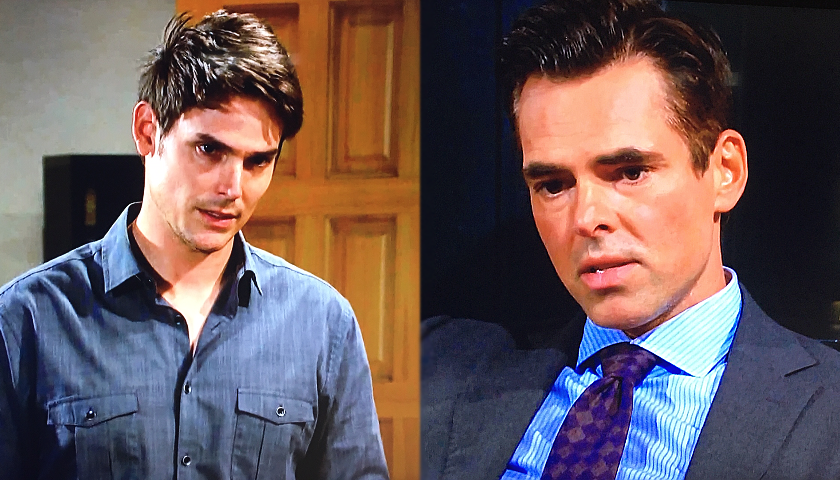 The Young And The Restless’ (Y&R) Adam Newman (Mark Grossman) and Billy Abbott’s (Jason Thompson) years-long dispute is coming to a head.

Their feud began in 2013, when Billy left his daughter Delia in his vehicle while he ran into a store. Her dog ran out into the road and when Adam swerved to avoid Dash, he unknowingly hit Delia, who was crouching in some bushes. Some viewers believe it wasn’t actually Adam who hit Delia, but that’s a story for a different day.

When Adam arrived home, he realized he’d hit someone and attempted to cover his tracks. He was horrified when he found out it was Delia and she had died. When Billy discovered who was responsible for his daughter’s death, he kidnapped Adam at gunpoint and forced him to confess.

One thing Billy tends to forget, when it comes to his nemesis, is that Adam saved him from a burning building. But that obviously didn’t score any brownie points in Adam’s favor. It was only a couple of years later that Billy then tried to kill Adam by running him down with a car.

If Chloe Mitchell (Elizabeth Hendrickson) hadn’t stepped in front of Billy’s vehicle, Adam would have been a goner. Let’s face it though, if Billy had “killed” him, he probably would have come back to life soon enough. Adam’s nine lives haven’t been used up yet.

On Team Billy, we’ve got his ex-wife Victoria Newman (Amelia Heinle), who had her own personal reasons for wanting revenge on her half-brother. Then there’s Kansas reporter Alyssa Montalvo (Maria DiDomenico). She recently discovered Adam killed her father AJ when he was only 11 years old.

On Team Adam, there’s his fiancé Chelsea Newman (Melissa Claire Egan), who stands by him through thick and thin and of course his ex Sharon Newman (Sharon Case). But his most powerful ally by far is his father Victor Newman (Eric Braeden). The Moustache has threatened to destroy anyone who comes after his son.

After Billy’s breakthrough a year ago, he promised Victoria his vendetta against Adam was finally over. But it never really went away. Now Billy has the chance to unmask Adam for the “dangerous man” he is. He’s got Alyssa working on a story for Chancellor Communications that will expose Adam’s darkness. “We are gonna take that filth and we are gonna shine a big, bright light on it for the world to see.”

Spoilers tease this battle is going to get even uglier before it’s over. What do you think? Are you rooting for Team Adam or Team Billy? Vote in our poll now!