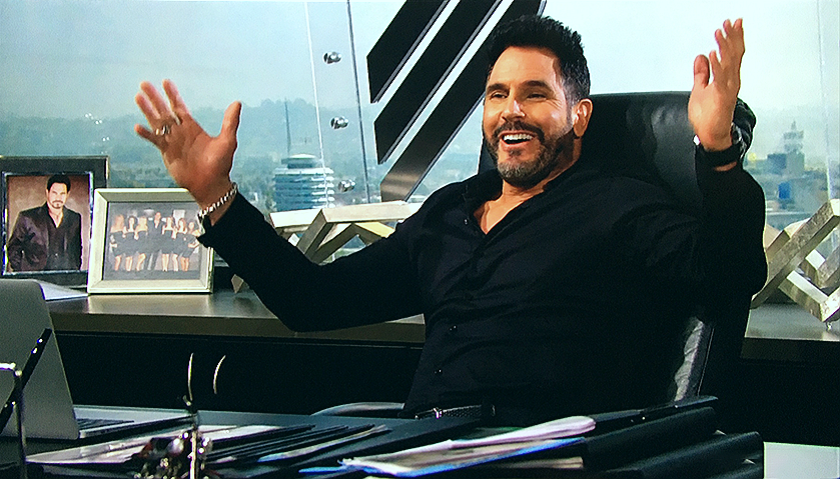 The Young And The Restless (Y&R) scoop reveals Don Diamont will be be back in Genoa City during the week of February 8, according to Soap Opera Digest.

Bold And The Beautiful (B&B) fans know him as Dollar Bill Spencer, publishing magnate and CEO of Spencer Publications. There were some hints that Bill might be an integral part of the Y&R and B&B crossover storyline when he met with Summer Newman (Hunter King) while she was in LA.

As Y&R fans know, Diamont appeared on the soap for more than 20 years as Brad Carlton, right up until Brad’s tragic death in 2009. So even he was surprised that he would return to Genoa City.

“I had not ever considered that I would be part of a crossover, just because my character was so well-defined at Young & Restless,” he told SOD. “It wasn’t like I was on for three months. I had never even considered that possibility, so it just kind of took me by surprise when they asked.”

Brad met his untimely demise when he jumped into a freezing cold lake. He pulled out Noah Newman (Robert Adamson), who’d fallen in. His gesture ended up saving Noah’s life and he died a hero.

It wasn’t long after that B&B Executive Producer Bradley Bell scooped him up. Bell created a brand new character for Diamont and fans would agree he’s made Dollar Bill his own.

Young And The Restless News – How Will Sally Spectra React If She Sees Him?

Now Diamont will come full circle, when he’s back on his old stomping grounds. Dollar Bill will likely meet up with some of Brad’s old acquaintances. This could include Lauren Fenmore (Tracey E Bregman) and Ashley Abbott (Eileen Davidson). But will he run into his old rival Victor Newman (Eric Braeden)?

What fans really want to know, however, is if Bill will happen to see Sally Spectra (Courtney Hope) when he’s back in town. Sally’s been worried recently that her past is going to catch up with her. So how will she react if she sees Bill?