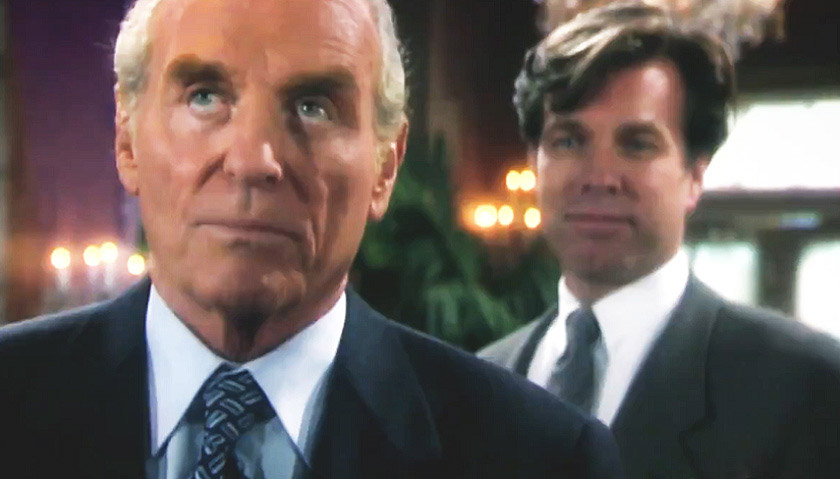 The Young And The Restless (Y&R) cast, crew and fans are mourning the passing of a legend. Jerry Douglas, who played John Abbott on the sudser, died on November 9 at the age of 88 .

Jess Walton (Jill Abbott) who plays Jill Abbott, and recently lost her real life husband John W James, paid tribute to Douglas. “Rest in peace my dear TV husband Jerry Douglas. Thank you for the laughter all those years. Much much love to you and your beautiful family Kim and Hunter and everyone.”

“Sending my love and prayers to his beautiful family,” Michelle Stafford (Phyllis Summers) posted. “Jerry is missed.” Y&R Executive Producer Anthony Morina released a statement, honoring Douglas. “Our show was lucky to have an actor of his caliber join the Y&R cast and introduce the audience to the iconic Abbott family. His contribution to the legacy of Y&R as Abbott family patriarch John Abbott is still felt to this day.”

Y&R News – Jerry Douglas Had Charisma Like No Other

Fans were also grieving the actor. “Wow. This is such sad news,” a fan said on Twitter. “My heartfelt condolences go out to his family and friends. I’ve always love the character of John Abbott as the family patriarch. May he rest in peace.”

Please join us in sending our condolences to the family of Jerry Douglas, known for his long-running role as the iconic John Abbott on the The Young and the Restless. He will be greatly missed by the Y&R family. ❤️ pic.twitter.com/7Kihvgqiel

“He could’ve lived another 20 years and it still would have felt too soon,” another commented. “Jerry was larger than life! A commanding voice and charisma like no other…May he RIP!!”

Douglas portrayed the Abbott family patriarch for 25 years. But producers killed off the character on August 18, 2006.  He did return many times in flashbacks and as a ghost to his son Jack Abbott (Peter Bergman). John’s last onscreen appearance was on February 19, 2020.

Young And The Restless News –  Fans Hoping For A Tribute Episode

However, many viewers still feel John Abbott’s death on the Y&R was a huge blunder. “The show firing Jerry was such a monumental mistake,” a viewer commented. “He left a big hole in the show.”

The same fan is also hoping the Y&R would find a way to pay tribute to the actor and the character. And others are on board with the idea. “They should have the “kids” sit around and reminisce about him. They could tell stories and show the flashbacks.”

Another fan said Douglas deserves a memorial episode, just as Y&R did for the late Kristoff St. John (Neil Winters). “Have Marla return for it and Eileen, Peter, Beth, Jess, Eric and anyone else who was closely involved with his character!” Let’s hope Y&R producers will grant fans their wish.

The Soap Scoop sends condolences to Jerry Douglas’ friends and family. Keep reading The Soap Scoop for the latest soap opera spoilers and Young And The Restless spoilers and latest news. And make sure you join our free Facebook Group or leave us a reply in our comments section.