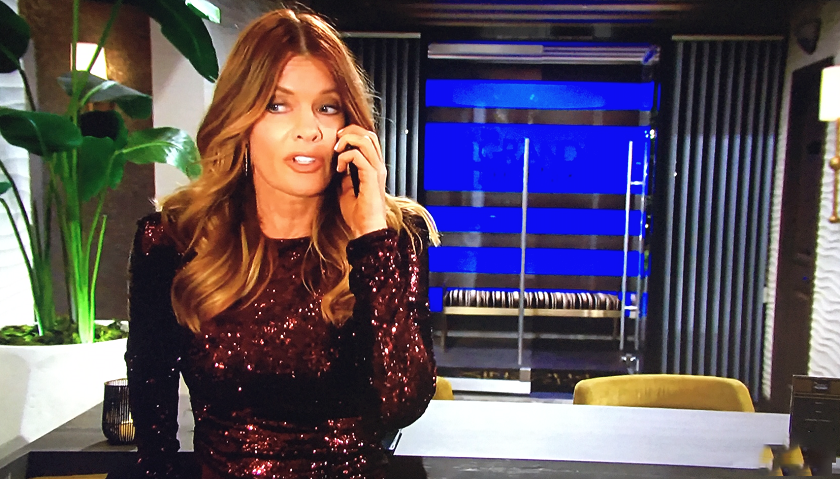 The Young And The Restless (Y&R) scoop for Wednesday, October 21 suggests Phyllis Summers (Michelle Stafford) will do her best to manage a crisis. Blood will be pouring from Nate Hastings’ (Sean Dominic) hand and Phyllis will call an ambulance.

At Crimson Lights, Billy will run into Mariah. He’ll mention he just saw Faith Newman (Alyvia Alyn Lynd) hanging out with an older girl. “She asked if I was gonna write another exposé about it,” he’ll say. Mariah will ask him where all his concern for Faith was when he published the article. Then she’ll tell him he’s just as bad as Adam Newman (Mark Grossman).

Spoilers tease that after punching Nate, Devon will head to Society. He’ll initially be rude to Abby Newman (Melissa Ordway), but will apologize. “I’m sorry…I didn’t mean to. It’s just I need some alone time.” But once he’s alone with his thoughts, all Devon will be able to do is think of all the signs he missed, indicating Elena and Nate were having an affair.

Devon will head back to his penthouse, where Elena is waiting. She will tell him Nate “sustained a serious injury to his hand. There’s nerve damage.” An unsympathetic Devon will stare straight ahead. She’ll then try to explain her indiscretion by saying that people make mistakes that can sometimes change the course of their lives.

Elena will tell Devon she loves him with all her heart. “Just not enough to keep your hands off Nate,” he will reply. “Just tell me what to do,” Elena will say. “Whatever it is, I’ll do it.” Devon will tell her exactly what she can do – stay in the guest room and then pack her things in the morning. As he leaves her standing alone in the living room, Elena will weep and sink to the floor.

Finally, Phyllis will sit down to gossip about what just happened with Amanda Sinclair (Mishael Morgan). “After he broke things off with me, I noticed the way he was looking at Elena,” Amanda will say. Phyllis will note that Elate work together and are friends. “They are considerably more than that,” Amanda will reply.

She’ll tell Phyllis that Elena was “in hot pursuit” of the ambulance that took Nate away. She will also say that Devon “just deserves so much better than this.” After Amanda goes upstairs, Phyllis will get a phone call from a reporter. The person will ask her for a statement on what happened. She’ll say she has no comment and will hang up.

Other News And Spoilers

B&B Poll: Do You Think Taylor Should Return?