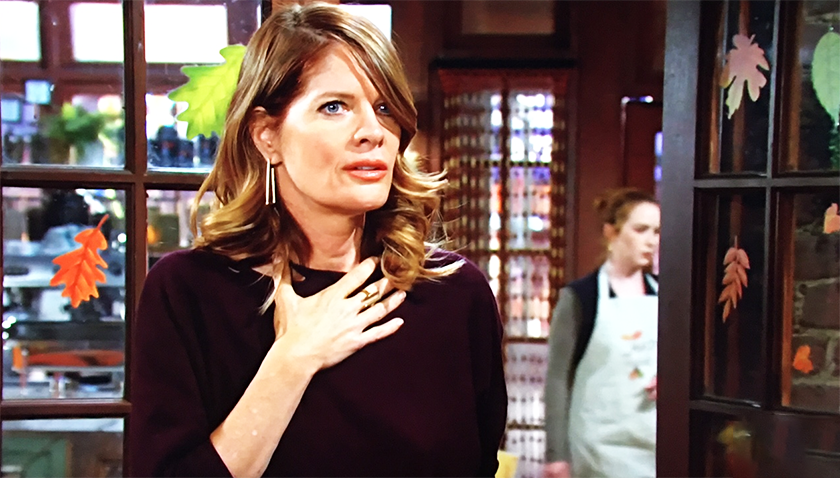 The Young And The Restless (Y&R) scoop for Wednesday, November 25 suggests Phyllis Summers (Michelle Stafford) will put her foot in her mouth.

Viewers should note, Y&R will be preempted on Thursday, for CBS Sports. Friday’s show will be the classic masquerade ball episode that originally aired on October 2, 1991. New episodes will be back on Monday.

Amanda will appear at Elena and Lola Rosales (Sasha Calle) door, holding a bottle of wine. When they sit down for a glass of wine, Amanda will ask her if she was hoping “it was going to be Nate at the door.” Then Lola will get back from work and be happy to see her room mate didn’t spend the day alone.

At Devon Hamilton’s (Bryton James) penthouse, Lily will tell him she invited someone to Thanksgiving dinner. He’ll tell her that’s fine, as long as it’s not Nate Hastings (Sean Dominic). “Today is about family and giving thanks for the blessings we do have,” she’ll say, just before Nate appears. Both men will stare each other down, but eventually Devon will say he guesses “this is a first step” to getting along again. “Glad that we were able to take it,” Nate will reply.

Meanwhile at the Abbott estate, Billy Abbott (Jason Thompson) will needle Summer about her smugness. “In case you were wondering Billy, I still hate you,” she’ll say. “So if you could go be a jerk somewhere else that would be really nice.” Kyle Abbott (Michael Mealor) will tell her he’s ready to hash everything out. “Kyle, I don’t even want to talk,” she’ll say. “I can’t overthink this. Not again.”

At Crimson Lights, Sharon will be busy getting ready to celebrate Thanksgiving by giving back to the homeless, with some help from Rey Rosales (Jordi Vilasuso) and Mariah Copeland (Camryn Grimes). Nikki Newman (Melody Thomas Scott) and Victor Newman (Eric Braeden) will also be there. As they sit in a booth, Victor will ask Nikki if he’s told her lately “you’re pretty and that I love you?”

Then Phyllis Summers (Michelle Stafford) will show up to help, but she’ll be more of a hindrance when she mentions Faith Newman’s (Alyvia Alyn Lind) recent hangover. Sharon will look over at her daughter and at Nick Newman (Joshua Morrow) and glare. Then she’ll confront Nick. “After the way we lost Cassie, you really decided to keep this from me?”

It looks like another great episode coming up! Keep reading The Soap Scoop for more Young And The Restless spoilers and news. And make sure you join our free Facebook Group.

All-new episodes and a Young and Restless classic to end the holiday week! Here’s how to watch #YR this week: https://t.co/90QBBoPTO8 pic.twitter.com/aRUpmbDNj2