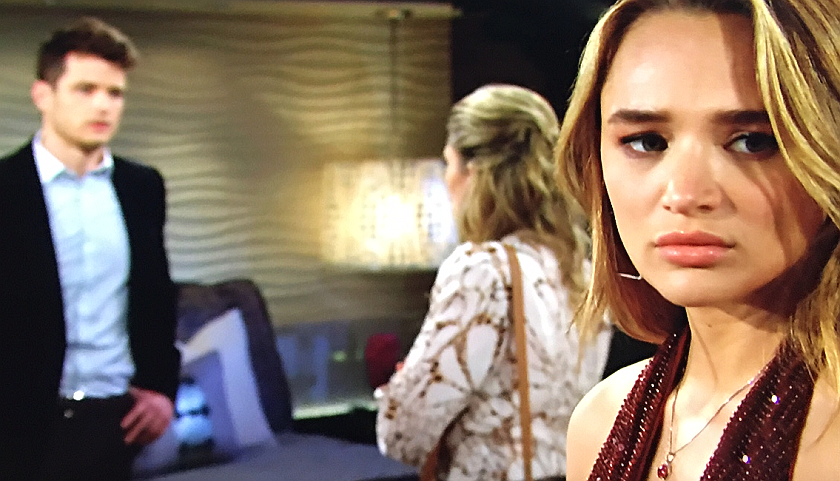 The Young And The Restless (Y&R) scoop for Wednesday, May 19 suggests Summer Newman (Hunter King) will tell her fiancé to slow down.

Spoilers tease Tessa will show up at the Skyle engagement party, only to find out it was a bust. She’ll suggest to Mariah they have a date night instead. Tessa will tell her girlfriend she looks more beautiful every day. Then she’ll tell her she’s booked them a room and a massage at the Grand Phoenix.

At Chance Comm, Billy will warn Lily that Adam Newman (Mark Grossman) and Victor Newman (Eric Braeden) will come after them. “Adam is a threat to everyone and everything, including Chance Comm,” Billy will say. He’ll suggest they ruin the reputation of Cyaxares before they even come out of the gate. Lily will agree they should be proactive and come up with a plan.

Meanwhile, Ashland will ask Kyle Abbott (Michael Mealor) where his wife and son are. Kyle will lie and say the last time he saw Tara she was leaving Genoa City. Summer will tell Ashland he can search their room. “You’re standing by your man, even though he’s a philanderer,” he’ll comment. “That really doesn’t bode well for your future.” Kyle will kick him out and Ashland will tell Kyle he’s going to regret lying to him.

In the lobby, Ashland will demand to know the names of everyone who has checked in during the past 24 hours. The lady in the green dress will say she can’t help him. Phyllis will ask what she can do. He’ll say she better tell him what he needs to know or her hotel will be history. He’ll threaten Phyllis, but she won’t back down.

Back in their suite, Kyle will tell Summer he needs to protect his son and he’s going to claim paternity. “So that’s it, no discussion with your fiancé?” she’ll say. She’ll suggest there are other ways to solve the problem. He worries what could happen to Harrison Locke (Kellen Enriquez) but Summer will say he needs to slow down and think things through. She’ll also tell him to imagine how Ashland would retaliate.

Tara will show up, wanting to know what happened with her husband. Summer will get a text from Phyllis, telling her Ashland was in the lobby, looking for Tara and threatening to call the police. As Tara panics, Kyle will assure her they aren’t going to lose. “I’ll make sure of it.” And as she listens to them, Summer will feel her relationship with Kyle slipping away.