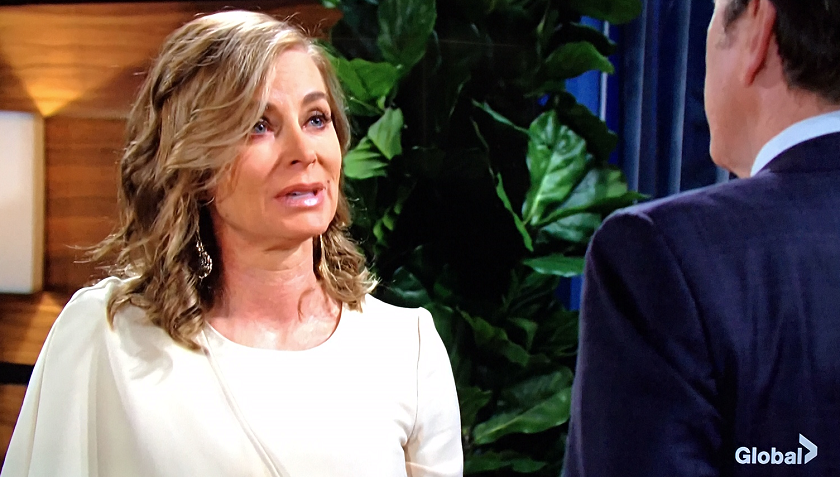 The Young And The Restless (Y&R) scoop for Wednesday, March 4 suggests Ashley Abbott (Eileen Davidson) and Jack Abbott (Peter Bergman) will worry about their mother.

Also coming up, Chloe Mitchell (Elizabeth Hendrickson), Kevin Fisher (Greg Rikaart), Lauren Fenmore (Tracey E. Bregman) and Michael Baldwin (Christian Le Blanc) will ride out the ice storm together. And Skyle and Thola will be stuck at Society for the night.

At Jabot, Ashley and Jack discuss how they knew Dina Mergeron’s (Marla Adams) days were numbered. Ashley’s worried that they’ll be stuck at the office for the night. She’d like to go see her mother and hopes to visit her later. Jack tells her Dina hasn’t been very coherent lately and has trouble recognizing people. “She is terrified of me, her son, and it’s pretty devastating,” he will tell Ashley.

Meanwhile, Theo Vanderway (Tyler Johnson) will show up at Society. He is hoping to take Lola Rosales (Sasha Calle) home because of the ice storm. They will exchange some flirty banter and are about to kiss when Kyle Abbott (Michael Mealor) and Summer Newman (Hunter King) show up.

Kyle tells Lola and Theo that their car is stuck. Summer is wet, so Lola takes her to get some dry clothes. “Sorry to interrupt your sleazy plan to seduce Lola,” Kyle will say to Theo, as the two women walk off.

He goes outside to try to start the car but he has no luck. Lola offers to feed them and Theo heads to the kitchen to see if he can help. She pushes him against the freezer and kisses him. He smiles and says he’s fine with her using him to alleviate her stress.

Other spoilers tease Abby Newman (Melissa Ordway) will weather the storm with Chance Chancellor (Donny Boaz). And Billy Abbott (Jason Thompson) will check in on Amanda Sinclair (Mishael Morgan) who won’t be happy to see him.

At the Chancellor Estate, Lauren and Michael thank Kevin for dinner and leave. But they will return quickly and tell Kevin and Chloe the roads are covered in ice and many are closed. Just then, Chloe will get a sharp labor pain.