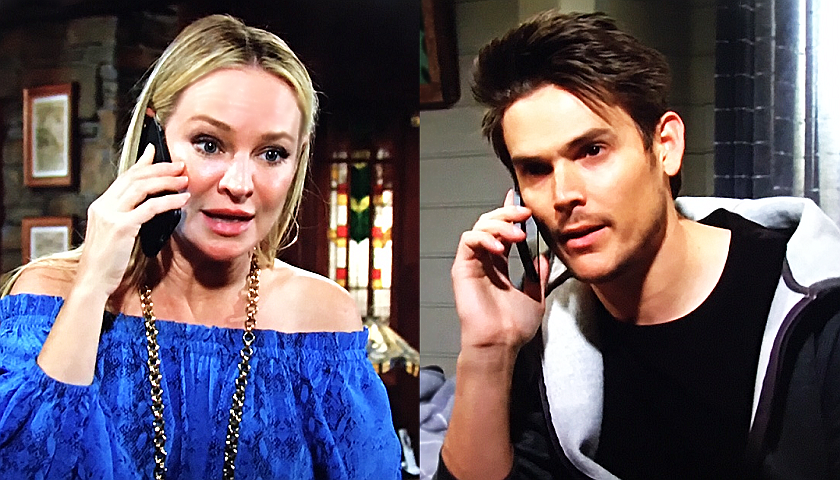 Spoilers tease Amanda will turn to Devon for advice. She’ll tell him her father’s death was not an accident and the worst part is that Naya Benedict’s (Ptosha Storey) father, her grandfather, is the main suspect. Devon will ask what the evidence looks like. She doesn’t know much but reading about her father’s accident, she’s sad and infuriated by how young he was when he died. All she knows so far is he worked at Newman Enterprises and had uncovered a bribery scheme.

At the penthouse, Chelsea will smile as she looks at an online story about the manhunt for Adam. Rey will arrive and ask her if she knows where Adam is. She’ll blink no and pretend to be angry. He’ll tell her he’s sorry she’s dependent on Adam.

Meanwhile, Sharon Rosales (Sharon Case) will tell Rey she’s trying to stay positive but it’s hard. After Rey leaves her phone will ring – it’s Adam. Sharon will say she can’t talk to him and she’ll be confused when he asks how Faith is doing. “I’m the one who found her and took her to the hospital.”

Adam will tell her he didn’t poison Rey and wants to meet so he can explain. He wants her to help him clear his name. Sharon will thank him for what he did for Faith but will tell him to stop. “I can’t take this on right now,” she’ll say. Mariah Copeland (Camryn Grimes) will arrive and Sharon will flashback to Cassie walking in the door. “I’m flat out terrified,” Sharon will tell her. “I can’t do it again.”

Young And The Restless Scoop – As Her Parents Pray, Faith Newman Opens Her Eyes

At the hospital, Nick will flashback to memories of when Cassie died. “It’s not the same,” he’ll say aloud. “Not at all.” Nikki Newman (Melody Thomas Scott) will show up and say she’s so sorry. He doesn’t blame her, however. Instead, he blames himself. “I should have protected my little girl,” he’ll say.

Later, Sharon will join Nick and he’ll ask if Rey has found Adam. He hopes her husband will “get that monster out of our lives. Name one person just one, who is better off because of Adam.” Ironically enough, he’ll also say he wants to shake the hand of the stranger who helped Faith. Both Nick and Sharon will then close their eyes and pray for their daughter and Faith will open her eyes.