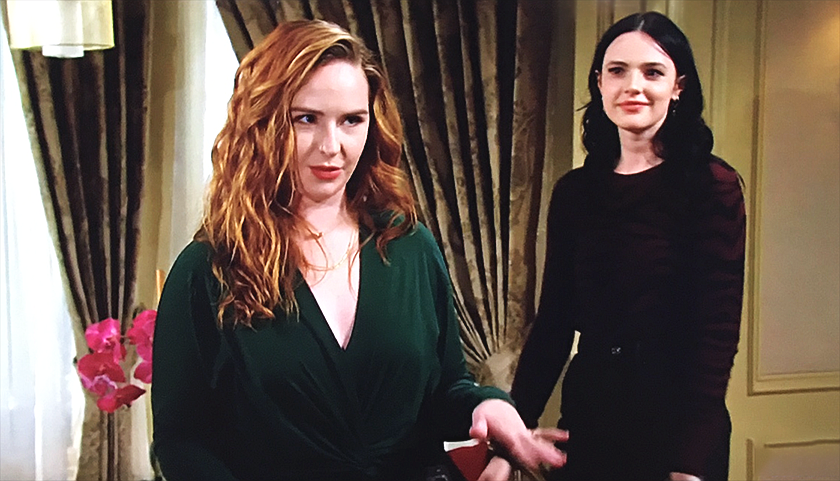 The Young And The Restless (Y&R) scoop for Wednesday, March 24 suggests Mariah Copeland (Camryn Grimes) and Tessa Porter (Cait Fairbanks) will move into the Chancellor estate.

Also coming up, Rey Rosales (Jordi Vilasuso) will wake up and Nate Hastings (Sean Dominic) will have some troubling news. Plus, Devon Hamilton (Bryton James) tries to reach out to Amanda Sinclair (Mishael Morgan).

Spoilers tease Sharon Rosales (Sharon Case) will sit vigil at her husband’s bedside. She’ll remind him of their wedding vows. “You can’t leave me now because we’re supposed to be partners,” she’ll say through her tears. Then Rey will wake up.

Young And The Restless Scoop – Rey Rosales Was The Intended Target

When Nate Hastings (Sean Dominic) walks in, he’ll tell Rey he was poisoned. “The question is, how did thallium get into your system?” Then he’ll say he’s arranged for a team to go into Sharon’s place to see if they can find any traces of the poison. Sharon will then spread the good news. She’ll text Faith Newman (Alyvia Alyn Lind) and Lola Rosales (Sasha Calle). Both will be relieved to hear that Rey will survive.

Later, Nate will return and say he has some troubling news. Sharon will ask if Rey is okay. The trouble is the poison was found in body wash, hair gel and shaving cream. However, it was only in the men’s products. Sharon will say it doesn’t make any sense. “This was no accident,” Rey will say. “I was the target. Someone poisoned me.”

At the Grand Phoenix, Amanda will see a message on her phone from Devon. Phyllis Summers (Michelle Stafford) will ask her what he said. Amanda doesn’t know, she deleted it immediately. However, he’ll show up at her door and say he understands how she feels. “You understand being cheated on by two different men with the same woman?” Amanda will ask him. Her mother will arrive and she’ll kick him out.

Meanwhile, Mariah and Tessa will be greeted by Abby Newman (Melissa Ordway) and Nina Webster (Tricia Cast) when they arrive with their bags. “If everything goes as expected today, all our lives could be changing,” Abby will say.

They’ll head out head out to Mariah’s embryo implantation appointment. When they return, Mariah will say she doesn’t want to jinx it, “but I feel different.” They’ll find out the results in nine days. But is Mariah pregnant with Abby and Chance’s baby?