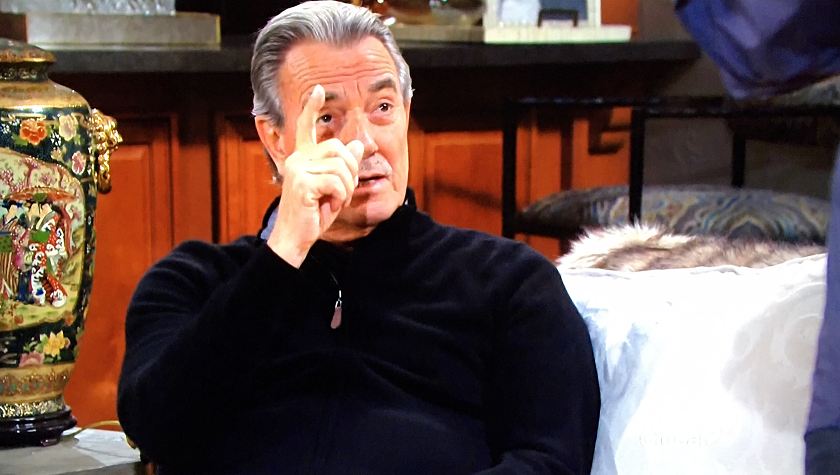 Young And The Restless (Y&R) spoilers for Wednesday, January 8 tease that Victor Newman (Eric Braeden) is going to give his son Adam Newman (Mark Grossman) a warning.

Also coming up on Wednesday’s episode, Abby Newman (Melissa Ordway) will give some advice to her friend and business partner Devon Hamilton (Bryton James).

Let’s start with Chloe, who will be hanging out at the Grand Phoenix with Billy Abbott (Jason Thompson). The pair will share some laughs and Chloe will tell him she’s pregnant. He’ll congratulate her and she’ll spot Chelsea by the bar. She’ll run over to her and share her good news.

Chelsea will tell Chloe she’s happy for her and that she has her own good news – she and Adam are back together. Stunned, Chloe will tell her friend she’s making a huge mistake and that Adam is dangerous. She will then drag Billy into their conversation and ask him to talk Chelsea out of it. Billy, however, has a live and let live attitude towards the whole situation, which irks Chloe even more.

At Society, Abby will have a frank conversation with Devon, who is out on a date with girlfriend Elena Dawson (Brytni Sarpi). Elena will get up to take a call and Abby tells Devon he should rethink his choice of having Cane Ashby (Daniel Goddard) look for Colin Atkinson (Tristan Rogers). She will then gush about dating Chance Chancellor (Donny Boaz). When Abby leaves the table, Devon will call Chance and hire him to follow Amanda Sinclair (Mishael Morgan).

Meanwhile, Adam will pay Victor a visit at the ranch. The Mustache will tell Adam he assumes that since Chelsea and Nick Newman (Joshua Morrow) broke up, he and Chelsea have reunited. Adam confirms the news and tells his father he’s thrilled to have his family back.

Victor will then warn him about Chelsea’s past and he’ll muse about her stability. Adam will shoot back, saying he will protect Chelsea and their son Connor Newman (Judah Mackey). “Good luck, my boy,” Victor tells him.

It looks like another exciting episode is coming up. Keep reading The Soap Scoop for more Young And The Restless spoilers and news.