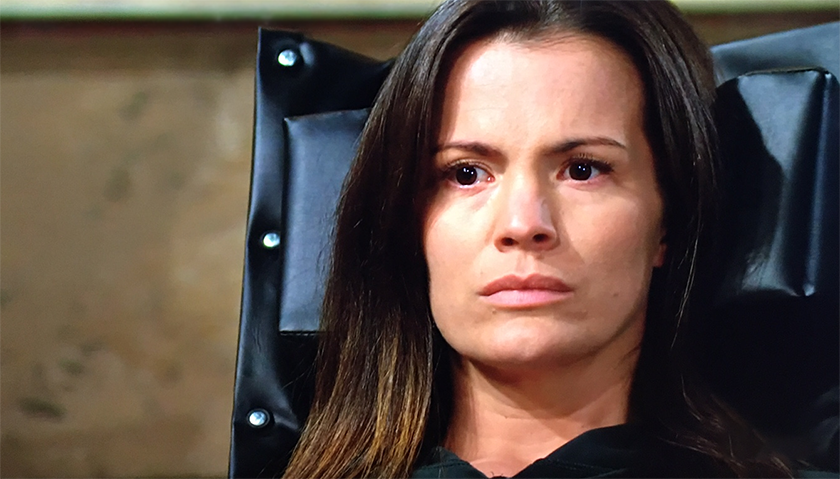 She’s not the only one. Adam will receive several visitors to the penthouse after the photo of he and Sharon Rosales (Sharon Case) kissing hits social media. Also coming up, Devon Hamilton (Bryton James) has news for Lily Winters (Christel Khalil) and Billy Abbott (Jason Thompson) will bait Victoria Newman (Amelia Heinle).

Spoilers tease Billy will show up at Victoria’s  house and ask her if she knew about the media company bid. By her reaction, he’ll realize she didn’t. He’ll say Victor Newman (Eric Braeden) may have put her in charge, but she’s not really running things. “He’s the one still calling the shots.” Billy will ask her to squash the deal with Ashland Locke. She’ll tell him they can talk about their kids or he can leave.

At the Grand Phoenix, Devon will meet with his sister and tell her he’s offered to be Abby Newman’s (Melissa Ordway) donor. Lily will say what he’s doing is great but will caution him. Viewers know she’s been through something similar and she’ll tell Devon “despite the best intentions things can get messy.”

Young And The Restless Scoop: Sharon Is Busted When Faith Sees A Photo Of Her Kissing Adam #YR #YoungandRestless #YoungandtheRestless #Shey #Shadam https://t.co/pWwEzhJNZL

Meanwhile, Rey Rosales (Jordi Vilasuso) will arrive home and show the photo to his wife. He’ll ask her how the kiss happened. She’ll say Adam acted impulsively. Rey will wonder why she didn’t tell him about it. “It was an irrational mistake,” she’ll say. Then he’ll storm out and slam the door.

A few minutes later, Nick Newman (Joshua Morrow) will be at her door. He’ll say he spoke with Faith Newman (Alyvia Alyn Lind) and she’ll be moving in with him for a while. Faith feels as though Sharon is choosing Adam over her. “It’s a slap in the face to everyone who’s supported you this year,” Nick will say. “Especially Rey and Faith.”

Victor will visit Adam and show him the picture but they’ll talk about it out in the hallway. Then Rey will bang on the door. He too will show Adam the photo. He’ll also threaten him and yell, “you stay away from my wife!”

Chelsea will know something big is going on but of course Adam won’t tell her anything. When she’s alone, she’ll manage to move her hand so she can grab a nearby phone. A tear will roll down Chelsea’s eye as she sees the photo of Adam kissing Sharon.