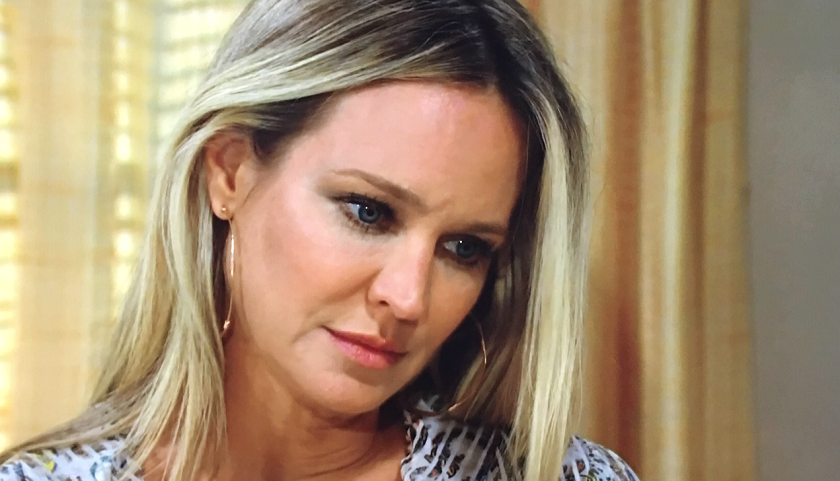 The Young And The Restless (Y&R) scoop for Tuesday, September 8 suggests Sharon Newman (Sharon Case) will receive some distressing news.

At Society, Theo will ask Lola what’s wrong but she’ll tell him she’s busy. He’ll attempt to explain why he was late and he’ll apologize, but Lola will blast him. Then she’ll say he’s changed since he got his new job. Confused and frustrated, Theo will leave.

Meanwhile, Devon will give Nate Hastings (Sean Dominic) a box with Hilary Curtis’ (Mishael Morgan) things. He’ll thank Elena Dawson (Brytni Sarpi) for her encouragement and is sure he’s made the right decision.

When Elena runs into Nate at Chancellor Park, she’ll be angry with him for opening up this whole can of worms. She’ll tell him about Devon staring at Hilary’s photo on his phone. Elena is worried where it’s all going to lead.

Then there’s Sharon, who will tell Rey Rosales (Jordi Vilasuso) her pathology results are in and she wants to go get them herself. When she returns, Rey isn’t there and she’ll open the envelope and read the grim report.

She’ll head to the motel and find Chance there with Adam. After he tracked him down, Chance told him about Alyssa Montalvo (Maria DiDomenico) snooping around and asking about Las Vegas. When he opens the door and sees Sharon, Chance assumes Shadam is having an affair. “This is none of my business,” he’ll say. “And don’t worry, I won’t tell Chelsea.”

After Chance leaves, Sharon will tell Adam she can’t help him anymore, she’s done. He’ll beg her to reconsider but she will refuse. When she returns home, Rey will tell her he saw the letter and says everything will be okay, as she collapses to the floor crying.

Even though Sharon has dumped Adam as her patient, spoilers tease her terrible diagnosis will only bring her closer to her ex. Viewers can look forward to another great episode. Keep reading The Soap Scoop for more Young And The Restless spoilers and news. And make sure you join our free Facebook Group.