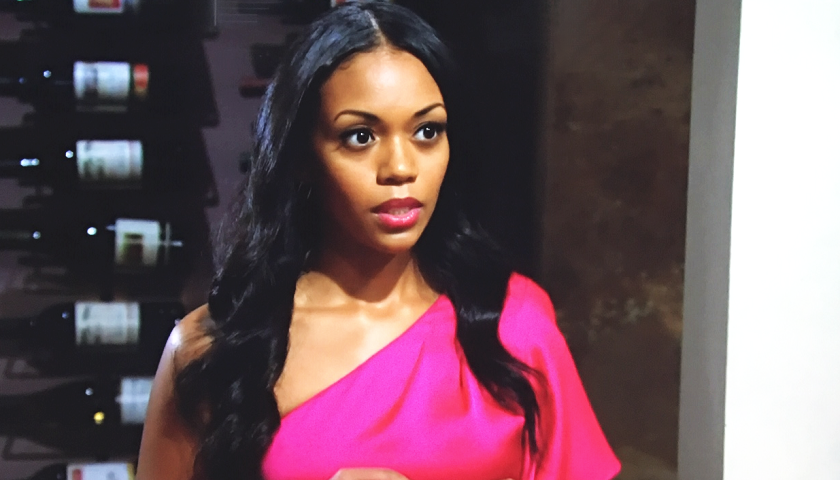 The Young And The Restless (Y&R) scoop for Tuesday, September 15 suggests Amanda Sinclair  (Mishael Morgan) will receive the DNA results.

It’s not surprising that Victor will wonder when Kyle will inevitably break his granddaughter’s heart again. He’s done it countless times in the past. Just last year he married Summer Newman (Hunter King) before she donated part of her liver to Lola Rosales (Sasha Calle). Kyle had promised her he would try to make the marriage work but dumped her weeks later.

Skyle will be at the Newman ranch and when Summer goes looking for Victor, Kyle will stay in the living room. Victor will walk in and Kyle will say he hopes The Mustache doesn’t mind that he tagged along. “I’m looking forward to talking to a married man who is shacking up with my granddaughter,” Victor will reply curtly. He will then chide Kyle for promising that he’d share his life with Summer and “instead you ended up with this Lola woman.”

Young And The Restless Poll: Who Should Adam Be With – Chelsea Or Sharon? Click on the link to vote! #YR #YoungandRestless #YoungandtheRestless #Chadam #Shadam https://t.co/ONtzktsH0j pic.twitter.com/MmaTKKg65F

At The Grand Phoenix, Phyllis will find Jack at the bar. He’s reading a note about love and he has it in his head that it’s a message from his mother. Phyllis will talk about what a powerhouse Dina Mergeron (Marla Adams) was. She doesn’t think she was all that sentimental. “I think the fortune you seek is in another cookie,” Phyllis will tell Jack.

Meanwhile, Abby Newman (Melissa Ordway) spots Chelsea Newman (Melissa Claire Egan) at Society. She’ll mention the reporter who’s been snooping around. Then the two women will discuss whether they think Alyssa Montalvo (Maria DiDomenico) is dangerous or not. At the same time, Alyssa will be at Chancellor Communications discussing the Vegas story with Billy Abbott (Jason Thompson).

Spoilers tease Amanda will be tense when Nate Hastings (Sean Dominic) hands her the envelope containing she and Hilary Curtis’ DNA results. After she reads it, she’ll tell him she has to go and see Devon Hamilton (Bryton James).

She’ll arrive at Devon’s penthouse a little later to deliver the stunning news. “It turns out I’m not as one of a kind as I originally thought,” she’ll say to Devon. “It turns out I had a twin and her name is Hilary.”