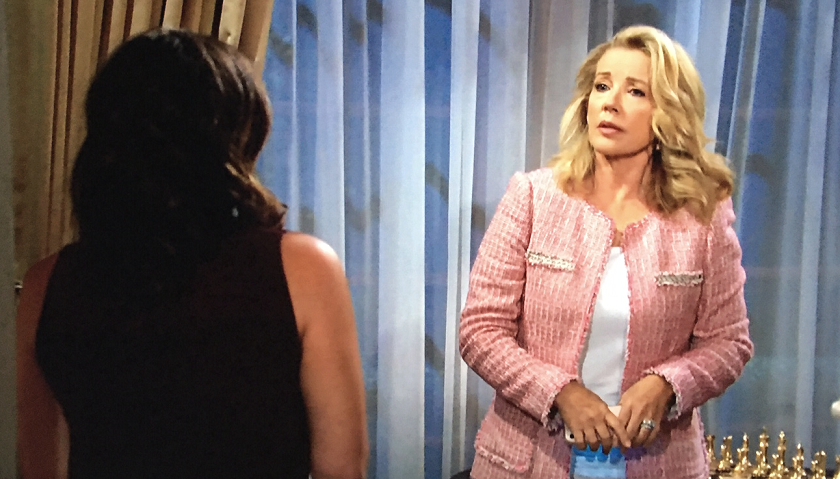 Spoilers tease Theo will arrive at Society and Lola will tell him she has to get to work. He’ll apologize and she’ll say it isn’t a problem. Then later, Lola will explain why she overreacted on Monday. Most of the time she thinks she’s gotten over Kyle Abbott (Michael Mealor) but then she’ll start questioning herself.

At The Grand Phoenix, Kyle and Summer Newman (Hunter King) will tell Phyllis Summers (Michelle Stafford) and Nick Newman (Joshua Morrow) they have news. “Uh, you’re engaged,” Phyllis guesses. “Are you pregnant?” Nick will ask. “Or both,” Phyllis will say, sighing. But Skyle will tell them it’s none of the above and they’re moving in together.

At the ranch, Chelsea will let Nikki know Victor Newman (Eric Braeden) invited her and Connor to stay the night. Nikki will mention she hopes that spending a night away from Adam Newman (Mark Grossman) won’t lead to them breaking up. “Distance doesn’t always make the heart grow fonder,” a snarky Nikki will say. Chelsea will tell Nikki she seems almost happy at the thought of she and Adam being over.

Meanwhile, Victor has just finished an intense conversation with Victoria Newman (Amelia Heinle). She laid out how she felt about his latest defense of her half-brother Adam. When Victor tried to defend himself, she gave him a look of disgust and marched off the Newman ranch.

Not one to take a hint, Victor will visit Adam at his penthouse. He’ll admit that he and Hope Wilson (Signy Coleman) should have dealt with what happened way back when. But regardless, he’ll say to Adam that he needs to deal with it now.

After Victor leaves, Adam decides to do the same and he’ll run into Sharon Newman (Sharon Case) in the hallway. He’ll tell her he thinks the best thing for Chelsea and Connor would be if he left town again. Sharon disagrees, but can she convince him to stay in Genoa City?

It looks like another good episode is coming up. Keep reading The Soap Scoop for more Young And The Restless spoilers and news. And make sure you join our free Facebook Group.